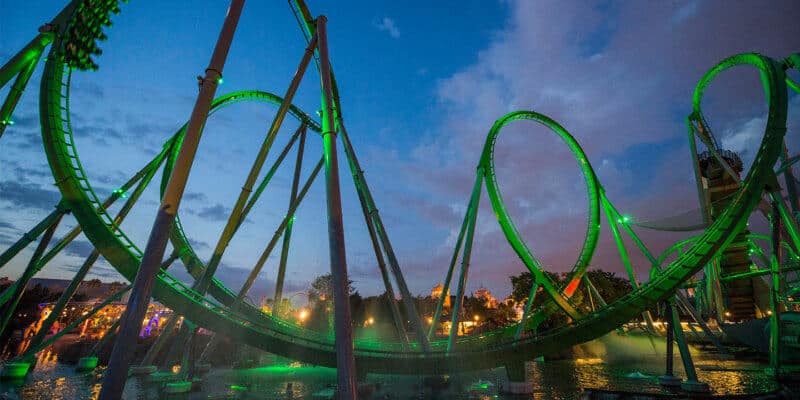 A popular Universal Orlando Resort attraction is under water following the effects of Hurricane Ian.

Universal Orlando Resort, home to two world-class theme parks in Universal Studios Florida and Universal’s Islands of Adventure, has already seen its fair share of damage from the storm.

As major flooding has taken place around the area, we reported this morning that a giant hole was spotted in the popular attraction Jurassic Park River Adventure from Hurricane Ian.

Now, another jaw-dropping photo has emerged from the same Universal Park. This time, at The Incredible Hulk Coaster.

User @lissainbama shared a photo where we can that a portion of the coaster is now completely submerged in water.

If you have ridden The Incredible Hulk Coaster, you know that there is a portion of the attraction where it dips and runs right above the water. When riders enter this area with a canopy over their head, there are misters going to give you a slight refresh as you enjoy the thrilling ride.

As you can see in the photo above, that area is now completely submerged in water. Once the flooding goes down, there will be an assessment of the track itself and if there are any damages. However, it should be noted that the track has been constructed to sustain water and potential flooding.

Universal Orlando has been closed on both Wednesday and Thursday. When it first closed, Universal shared that it hoped to reopen on Friday, but it is unknown at this point if that will still happen considering the conditions of the community and its surrounding areas

If it doesn’t reopen on Friday, Halloween Horror Nights will also be canceled again– for a third-straight night– and Universal, just like Walt Disney World, will have to reassess conditions over the weekend.

Inside the Magic will continue to keep you updated on the effects of Hurricane Ian across the state, including on Walt Disney World Resort and Universal Orlando Resort.