Surprise at Disneyland as Pirates of the Caribbean Star Reveals Themselves, Fans Can't Believe It - Inside the Magic 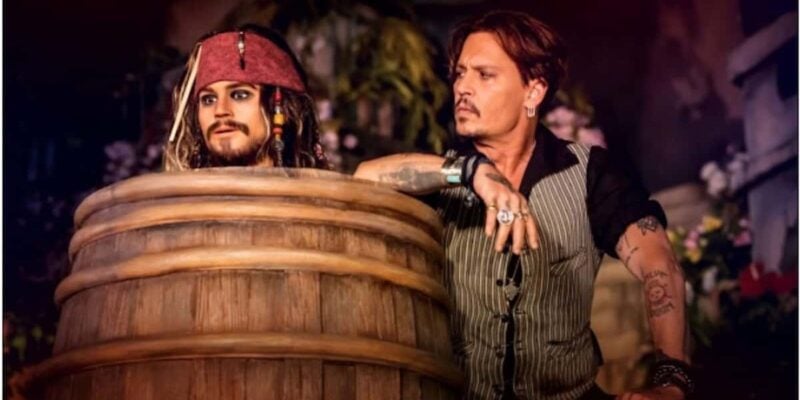 Disney Parks are hotspots for spotting celebrities and other theme park icons like Walt Disney Imagineers and those who play a role in bringing the plethora of experiences to life.

Over the festive season, one star of the Pirates of the Caribbean attraction showed up at Disneyland Resort and fans can’t believe who it is.

It’s no secret that Disney Parks, especially domestic Parks such as Walt Disney World Resort and Disneyland Resort, are hugely busy at this time of year. In fact, Walt Disney World in Orlando, Central Florida was completely fully booked yesterday (December 29, 2022) with a total wait time for rides and experiences hitting 23 hours for Magic Kingdom only.

Likewise, on the other coast, Disneyland Resort’s Disney Genie+ service continues to sell out with Guests opting to drop over $25 for quicker access to their favorite attractions like Space Mountain, Splash Mountain, Guardians of the Galaxy — Mission: BREAKOUT!, and the classic, Pirates of the Caribbean.

The latter has a presence all over the globe in both US Parks as well as other destinations like Disneyland Paris and Tokyo Disney Resort. Very popular among old and young, new and seasoned Guests, Pirates of the Caribbean is the attraction that the billion-dollar movie franchise starring Johnny Depp as Captain Jack Sparrow is based upon.

And while Guests boarding the boats of Pirates of the Caribbean, which can be found in New Orleans Square at Disneyland Park, can expect to encounter Blue Bayou diners at the start and the rogueish Jack Sparrow at the end of their voyage through the seas, they will also happen upon a number of other vignettes and stories of the swashbuckling genre — one of which is Pirate Redd, the female pirate that replaced the problematic “Redhead” in the Disney attraction.

Recently, the voice of Pirate Redd showed up at Disneyland Park and met the in-Park meet-and-greet character of the same name. Grey DeLisle shared her experience on Twitter:

I’m the voice of #PirateRedd on the #PiratesOfTheCaribbean ride and I finally got to meet the REAL ONE at @Disneyland !!!

I’m the voice of #PirateRedd on the #PiratesOfTheCaribbean ride and I finally got to meet the REAL ONE at @Disneyland !!! ❤️☠️❤️ pic.twitter.com/XPXTXsh8SP

Pirate Redd joined Disneyland Resort as a meet-and-greet character back in 2018, shortly after making her debut in the Pirates of the Caribbean attraction. On the character, Disney previously said, “Redd travels to various ports throughout the Caribbean—selling rum and collecting coin.”

As for Grey DeLisle, the actress is a big name in voice-acting circles and has provided the voice of numerous popular characters including Wonder Woman in various animated DC projects, Daphne Blake in Scooby-Doo, Pepper Potts and Captain Marvel in an assortment of Marvel outings, and narrated Tinker Bell and the Legend of the NeverBeast (2015) for Walt Disney Studios Home Entertainment.

DeLisle’s post on Twitter garnered a lot of reception, leaving fans in shock that it was her voice that brought Pirate Redd to life at Disneyland.

Did not know this! As if you weren’t cool enough.

Did not know this! As if you weren't cool enough.

So the body that embodied the disembodied voice found her body?

So the body that embodied the disembodied voice found her body?

It’s not the first time a Pirates of the Caribbean character has appeared at a Disney Park. Johnny Depp famously surprised Guests riding the attraction as Captain Jack Sparrow in honor of the release of Pirates of the Caribbean: Dead Men Tell No Tales in 2017. Since the intense bout of domestic abuse controversies surrounded the actor, many Disney Park fans have wondered in the company will remove the Jack Sparrow animatronics from the attraction, but as of yet, the fan-favorite pirate still remains.

If like Ms. DeLisle, Guests want to meet Pirate Redd, they can do so at New Orleans Square in Disneyland Park. This face character does not meet at Disney California Adventure Park.

Have you ever met Pirate Redd at Disneyland? Let us know in the comments down below!