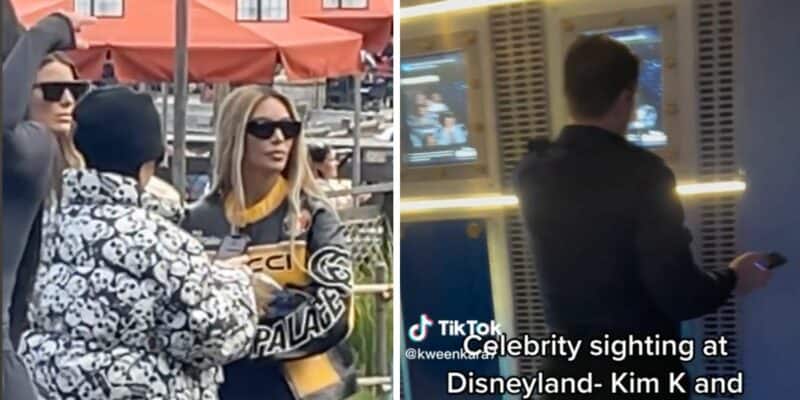 It’s no secret that celebrities love the Disney Parks and Resorts as much as we do, with dozens being spotted every month. The Karshasian family is no different.

Both Disneyland and Walt Disney World seem to be a hotspot for celebrities. In addition to Chris Evans and Kylie Jenner, we at Inside the Magic have also spotted Julianne Hough (Dancing With the Stars, Footloose, Safe Haven), Darren Criss (Glee, Muppets Haunted Mansion), and Kristen Chenoweth (Descendants, Annie, Wicked) at the Parks in the last year.

To bring it back to the Kardashians, it seems like they just can’t get enough of Disneyland, as Guests were quick to spot them during a recent trip. A video of the family visiting Disneyland is linked down below:

Both Kim and Kourtney were spotted along with the whole ganf. Celebrities like these typically visit Disney with a bodyguard or security team to ensure they remain safe. However, safety isn’t then only responsibility of a bodyguard.

A recent video shared on TikTok captured what looks like a bodyguard blocking the photo kiosk at the end of Space Mountain:

As you can see, a bodyguard was blocking the screen with a piece of paper, presumably so no other Guest could get the photo.

In the past, Kourtney’s sisters Kim and Khloe have also caused some commotion at the Disneyland Resort after cutting through the huge crowds and riding an attraction all by themselves. This understandably made lots of Guests angry, as they had been waiting their turn for the ride. Some keen Guests even claimed that the Kardashians used Disney’s disability pass in order to bypass the lines. These claims were baseless except for the fact that there was a blue tag spotted on one of the Kardashian’s strollers. It is important to remember that we do not know the medical conditions of the Kardashian family or their children.

Have you ever spotted a celebrity at Walt Disney World or Disneyland?