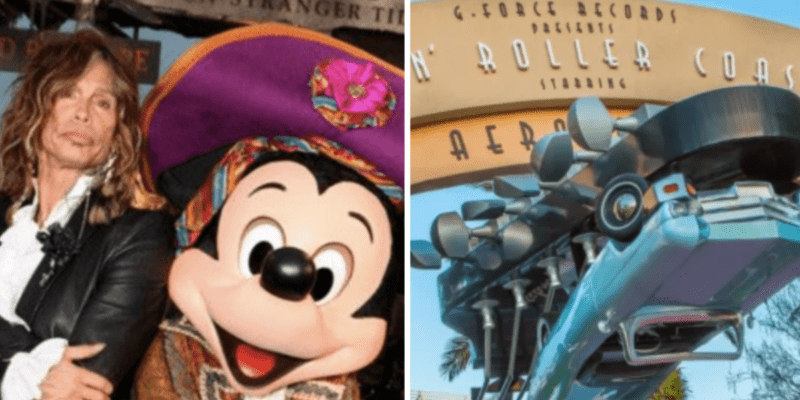 Rock ‘n’ Roller Coaster Starring Aerosmith first opened on July 29, 1999 at Disney’s MGM Studios (now Disney’s Hollywood Studios) on Sunset Boulevard and debuted with a dedication ceremony that included Aerosmith. This was the first roller coaster at Walt Disney World to feature multiple inversions, and the ride vehicles had 120-125 speakers and 24 sub-woofers, perfect for the big-time rocker.

The iconic attraction features a line queue that has a preshow with Aerosmith, including headman Steven Tyler, before Guests take a wild ride on a super stretch limo on their way to a concert.

Now, on top of this closure, a lawsuit has been filed against Steven Tyler alleging some disturbing details.

According to a lawsuit that was obtained by Rolling Stone, Tyler brought Julia Holcomb– who was 16 at the time– back to his hotel room, and they discussed her age, as well as her troubled home life. Tyler then allegedly “performed various acts of criminal sexual conduct upon” her before sending her home the next morning.

Many fans and insiders have speculated for years now that a retheme could be coming to the roller coaster, and this controversy may be the final straw to push Disney into doing exactly that. Even if it’s just removing the line queue theming, preshow and calling it “Rock ‘n’ Roller Coaster,” with new songs on the ride, it would seem that something would be happening in the future.

A dream retheme of the coaster, started by fans, has always been to change the coaster to a Powerline attraction. Powerline is the band in the iconic film, A Goofy Movie (1995), but Disney addressed those rumors in its closing announcement, as well.

Inside the Magic will keep you updated on this lawsuit and potential fallout.