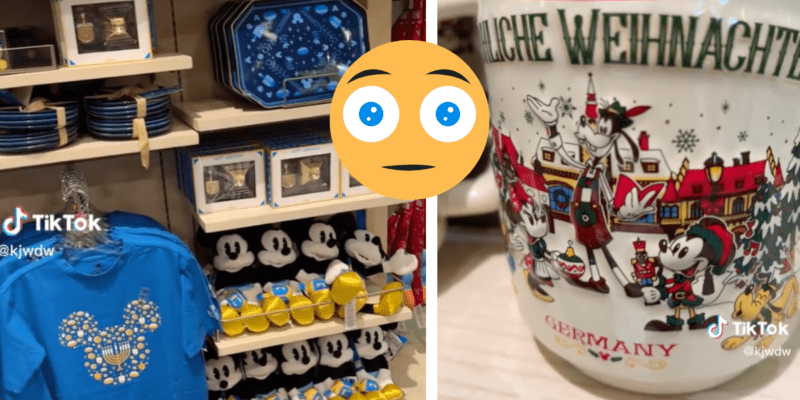 Soon after deleting a tweet that many viewed as antisemitic, The Walt Disney Company once again found itself at the center of social media controversy.

Last week, Walt Disney World Resort tweeted an advertisement featuring Twilight Zone Tower of Terror at Disney’s Hollywood Studios. It referred to the year 1939 – when the ride’s storyline begins – as a “vibe” and a “#HappyPlace.”

Amid rampant antisemitism boasted by Kanye West and other outspoken white supremacists/Nazis, many found the tweet insensitive. The Disney Park deleted the tweet after five days of backlash, but nothing posted on the Internet ever disappears. @ceezedby tweeted:

Um, Disney World, whom did you think 1939 was a #HappyPlace for exactly?

Um, Disney World, whom did you think 1939 was a #HappyPlace for exactly? pic.twitter.com/99ObLVrYMS

Amid this controversy, @kjwdw shared a video of a questionable merchandise display at Walt Disney World Resort:

“Aw, it’s so nice that Disney has all this Hanukkah stuff,” the Guest says as they approach a round merchandise display. “Let’s see if there’s more on the other side… Oh.”

“Both collections are nice, but they need to be at least 100 feet apart,” @soycuredeggyolks wrote.

“They said pick a side 😳,” @sambodrvzalambo commented.

Days after sharing this video, the Guest returned to the souvenir shop and found that the Disney Park had quickly moved the display. They shared another video:

“In case anyone was wondering they moved it now lmaoo,” the Guest wrote.

A few months ago, we reported on a swirling rumor that Walt Disney World Resort might change its name due to accusations that Walt Disney was antisemitic, though this is widely dismissed by people who knew him. In his book, “Walt Disney: The Triumph of the American Imagination,” Neal Gabler said the rumors are based on a scene in The Three Little Pigs (1933) in which the Wolf is depicted as a Jewish peddler. That scene was later reimagined and reanimated.

Gabler also notes that a month after Kristallnacht, in 1938, Disney welcomed a Nazi director, Leni Riefenstahl, to his studios. Riefenstahl is known for producing Nazi propaganda and was alleged to be “Hitler’s Favorite Filmmaker.” According to Gabler, however, Disney practiced tolerance in his home life:

“There is some dispute whether the same spirit of tolerance extended to the studio, but of the Jews who worked there, it was hard to find any who thought Walt was an anti-Semite.”

Because Walt Disney passed away in 1966, it’s impossible to know his true beliefs on race, religion, and other sensitive topics. But many things have changed at the Disney Parks since his day. Notably, a Jewish mezuzah on Main Street, U.S.A., is the only permanent religious item on display at Disneyland Park.

Do you think Walt Disney World Resort should have changed the Hanukkah merchandise display?