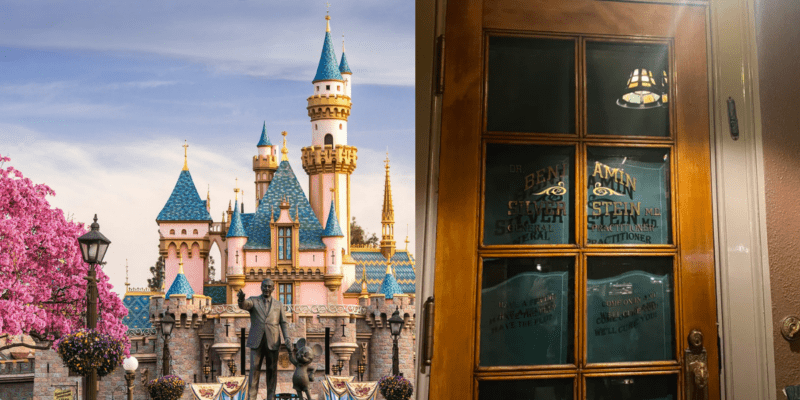 Walt Disney was well-known for being a Christian but, for the most part, kept his faith outside of the Disney Parks. When celebrating the December holidays, Walt Disney World and Disneyland try to include Guests of multiple religions with merchandise, food, and decor.

On a recent vacation to Disneyland, one Guest discovered the one piece of religious iconography that stays at Disneyland Resort year-round.

u/DASBULLCRAP posted a photo of a doorframe on Disneyland’s Main Street, U.S.A. writing:

The only religious related item in Disneyland

The only religious related item in Disneyland from Disneyland

You can see a small metal case known as a mezuzah on the right side of the doorframe. A mezuzah is a piece of parchment inscribed with the Jewish prayer Shema Yisrael from the Torah, often encased in metal and placed on the doorframe of a Jewish home as a sign of faith.

The mezuzah hasn’t always been at Disneyland. According to the Los Angeles Magazine, it was added in 1995 by then Disneyland President Paul Pressler, who wanted a place to celebrate Hanukkah at the Park. It hangs on the doorframe to the office of Dr. Benjamin Silverstein, a fictional doctor. Though many Disneyland doors are inscribed with the names of those who helped Walt Disney build the Park, Silverstein doesn’t have a real-life counterpart.

According to JlifeOC, a Menorah is also placed on the second floor of a window on Disneyland’s Main Street, U.S.A., during the holiday season, an addition also made by former Disneyland president Paul Pressler.

While the mezuzah is the only religious item around Disneyland year-round, Disney Parks are known for going all out for the holidays. Disneyland Resort hosts two different holiday celebrations, one for all Park Guests and one ticketed after-hours event.

All Guests can enjoy the Festival of the Holidays at Disney’s California Adventure Park. Guests can celebrate with food, drinks, music, and more that celebrates holidays worldwide. More from Disney:

Take in the sights and sounds of this joyous celebration of cherished holidays—including Christmas, Hanukkah, Diwali, Kwanzaa and Three Kings’ Day—that make the season bright through diverse festivities and beloved seasonal traditions.

If you’re looking for more festive fun, you can purchase a ticket to Disney’s Merriest Nites at Disneyland Park. This after-hours celebration includes six holiday parties in one with unique merchandise, food, PhotoPass opportunities, exclusive entertainment, and more. From Disneyland:

Our classic holiday favorites have some new twists! Mickey Mouse has invited many of his friends to host 6 themed parties throughout Disneyland Park on select nights—so you can celebrate the season in a merry new way.

Have you ever noticed the mezuzah or the Menorah at Disneyland? Let us know in the comments.

If you want to visit Southern California’s Disneyland and Disney’s California Adventure or Florida’s Walt Disney World on your next family vacation to experience any of the four Disney Parks — Magic Kingdom, EPCOT, Disney’s Animal Kingdom, and Disney’s Hollywood Studios — but aren’t sure where to begin planning, then don’t hesitate to reach out to our friends over at the Authorized Disney Vacation Planners at Academy Travel for a free quote.