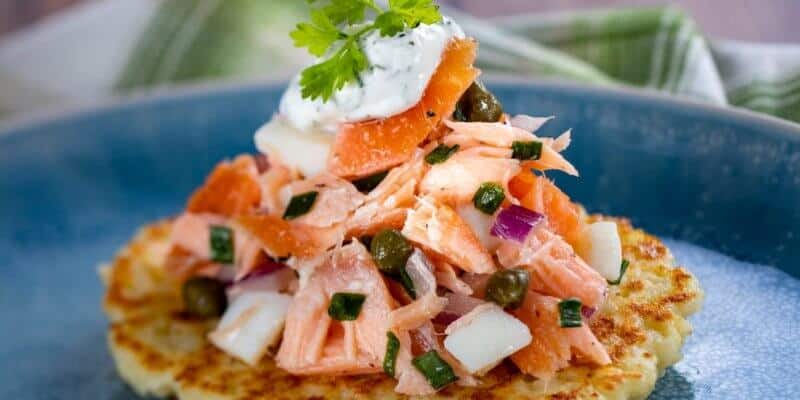 For the second year in a row, a delicious light of Hanukkah will shine bright at EPCOT’s International Festival of the Holidays. And this year, there are latkes! And jelly donuts!

Disney unveiled the gastronomic lineup for EPCOT‘s International Festival of the Holidays back in November. We were treated to some delightful surprises. One of those surprises was the addition of latkes and sufganiyot to the menu at the L’Chaim! Holiday Kitchen.

You have two choices of latkes: more casual potato latkes with sour cream (reportedly kid-approved), or the smoked salmon potato latkes sprinkled with onions and capers.

The sufganiyot (mini jelly donuts) and a black and white cookie are the options for your sweet tooth. There is also a kosher cheesecake available upon request.

Related: 2019 Menu for the Holiday Kitchens at the Epcot® International Festival of the Holidays is here!

The latkes and donuts join returning menu items like the pastrami on rye sandwich, and the Blue Cosmo Cocktail.

This will be the second year Disney included traditional Jewish food in its holiday festival, but this will be the first year that traditional Hanukkah food. The latkes and the jelly donuts replaced last years’ potato knishes, and chicken and matzo ball soup.

L’Chaim Holiday Kitchen was inspired by a NY-Style Deli. Instead of being transported to far off places, festival guests will be transported to Brooklyn. This pop-up stand will also feature a seasonal holiday brew called “Chanukah, Hanukkah: Pass The Beer” from Schmaltz Brewing Company.

2019 EPCOT International Festival of the Holidays is an expose of the holiday culinary traditions from around the world, covering peoples from the Far East and Africa to the Yukon. The festival runs from through December 30.

If you are planning a trip to EPCOT International Festival of the Holidays, the experts at Academy travel can help make it the most magical trip yet!