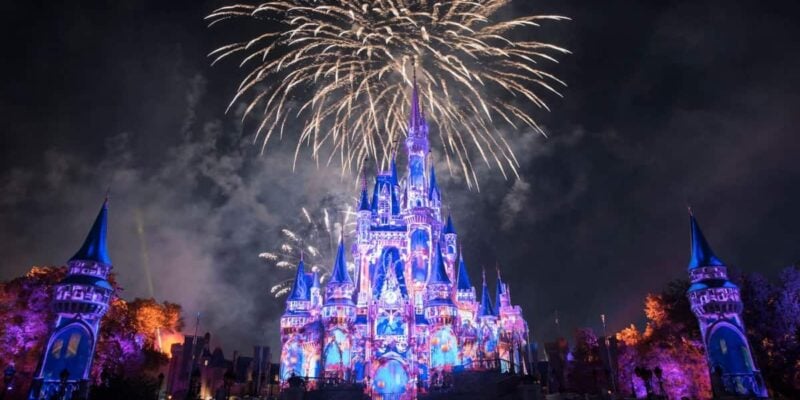 The beloved Happily Ever After fireworks show will be returning to Walt Disney World Resort in 2023, but it won’t be the same.

There are plenty of exciting developments coming to both Disneyland Resort and Walt Disney World Resort next year.

In a recent D23 publication, Disney previewed all the exciting happenings set to take place in 2023. As part of the 100th-anniversary celebration at Disneyland, Guests can look forward to the opening of Mickey & Minnie’s Runaway Railway on January 27 and the long-awaited return of the Magic Happens parade beginning February 24.

Mickey & Minnie’s Runaway Railway first opened at Walt Disney World in 2020 and arrives at Disneyland Park to kick off not just the Disney100 celebration but to usher in the reopening of Mickey’s Toontown on March 8. Guests of D23 Expo were able to get a sneak peek at what’s in store for the reimagined land, including Goofy’s How-To-Play Yard and CenTOONial Park.

One interesting comment happened when Disney previewed the upcoming developments coming to Walt Disney World Resort, including the return of Happily Ever After, a beloved fireworks show at Cinderella Castle in Magic Kingdom.

“The Happily Ever After fireworks will once again light up the sky with an updated version of the show in 2023,” Disney said.

This confirms that the fireworks show won’t just have the beloved anthem returning, but will also likely feature new projections and much more.

In addition to the return of Happily Ever After, Walt Disney World Resort is taking Disney Park Guests into the Grid with the opening of TRON Lightcycle/Run, an attraction that lets you climb aboard your own Lightcycle and race against the Grid’s speediest Programs. The highly anticipated coaster has been a fan-favorite at Shanghai Disneyland and will open at Magic Kingdom Park in the spring. Something a little more ghoulishly delightful is materializing over in Magic Kingdom’s Liberty Square; as announced at D23 Expo 2022, the fan-favorite and extremely beloved Hatbox Ghost will make his home at Magic Kingdom’s Haunted Mansion next year.

As EPCOT’s multi-year transformation continues, Disney World Guests will start to see some new enhancements open in late 2023. The World Celebration neighborhood and Journey of Water, Inspired by Moana, will offer Guests new and exciting experiences, while Figment will return to appear live and spark guests’ imaginations.

What do you think of changes coming to Happily Ever After? Let us know in the comments!