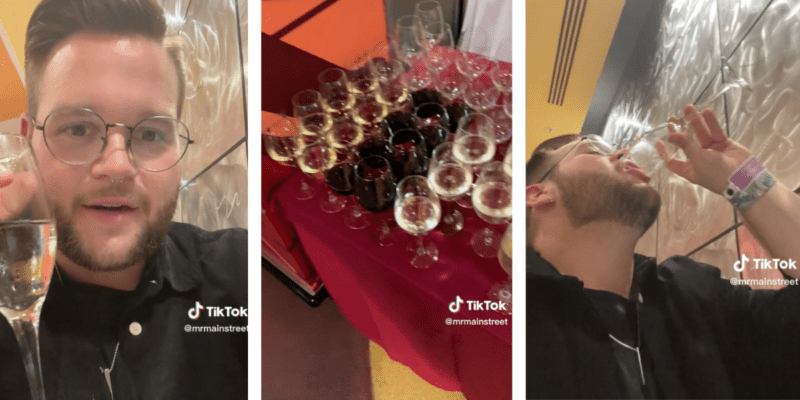 When Walt Disney World Resort opened in 1971, it was an alcohol-free vacation destination. As times changed and society began to accept social drinking, Disney Parks slowly introduced beer and wine to their menus. Now, Guests can walk through EPCOT, Disney’s Hollywood Studios, and Disney’s Animal Kingdom with a beer or Rum Dole Whip Float in hand.

Still, Magic Kingdom, the original Florida Disney Park, remained alcohol-free until 2018. At that point, beer and wine were added exclusively to Table Service restaurants like Crystal Palace and Be Our Guest.

Now, every Table Service restaurant in Magic Kingdom serves alcohol. Though most restaurants limit the number of alcohol Guests can purchase, unlimited drinks are available at Fireworks Dessert Parties at Tomorrowland Terrace restaurant.

“I’m not here for dessert. I’m here to get drunk in Magic Kingdom,” Banks said in a TikTok:

Banks shared his experience finding the drink with the highest alcohol percentage and mixing it with POG juice, a popular tropical drink available throughout Walt Disney World Resort.

After twelve drinks, Banks was cut off. He didn’t appear to act belligerently or cause a disturbance, but Disney Cast Members have the right to refuse service if they believe someone has had too much to drink… even at “all you can drink” parties.

The video received hundreds of thousands of views and made its way back to Tomorrowland Terrace Cast Members. “This has reached the staff. We are proud of you,” one wrote.

Another said it made the Cast Members’ group chat and called Banks “amazing.”

“This has reached the tlt staff, Im glad you had a great time!” one Cast Member said. “So glad y’all had an amazing night,” another echoed.

Banks enjoyed his Magic Kingdom Dessert Party experience and didn’t complain about being cut off.