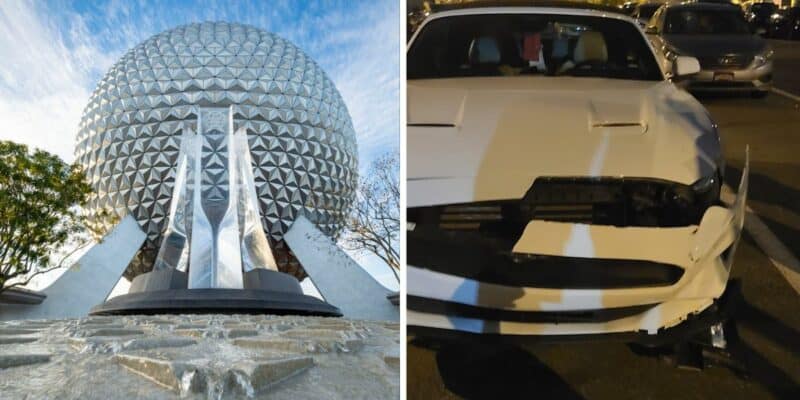 One Guest shared their experience (and photos) of witnessing a hit-and-run going down at the Walt Disney World Resort.

Even though Walt Disney World is supposed to be “The Most Magical Place on Earth,” the real world can often creep in in unexpected ways. Sure it’s completely expected to have to deal with intense crowds and the brutal Florida heat, but other things can also happen despite the promise of a perfect day.

Related: Guest Told to Take Off Shirt in Disney Due to Graphic, Explicit Design

In the past, we have seen Guests days get entirely ruined, either by accident or on purpose. A few unlucky Guests even had their possessions stolen from their car when they were visiting Disney Springs, Disney World’s massive shopping center.
Of course, bad things happen at the Parks, too, and recently, a few Guests had an incredibly bad day when they returned to their car in the parking lot.

At EPCOT, a “hit and run” occurred, leaving a clean, nice-looking vehicle practically destroyed. A post was shared online by a Disney fan who witnessed the incident unfold. The post reads as follows:

“If you are parked in Epcot Journey 6 tonight (12/10) we saw the van that hit you and left my number with security.

****update owner contacting me ad filing a report. It was a white Ford transit van and they looked and drove away****”

A van reportedly smashed into the car and took off, but that’s where the story ends. We can only hope security was able to inform local authorities and identify the van that was involved in the ordeal.
Have you ever had a not-so-great experience at Walt Disney World?