Guest Told to Take Off Shirt in Disney Due to Graphic, Explicit Design - Inside the Magic 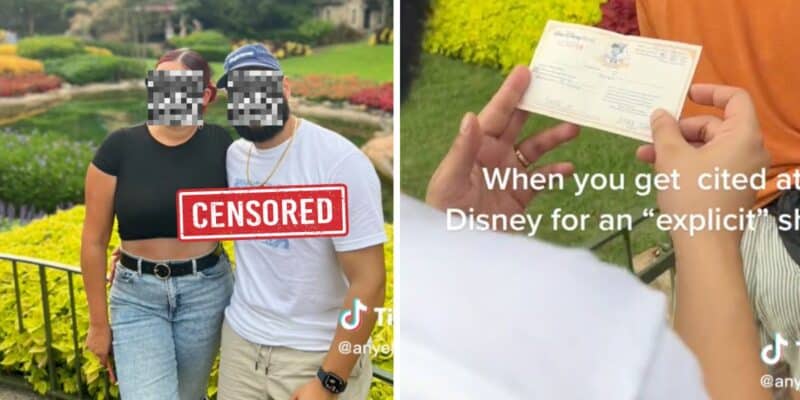 One Guest was cited for wearing an explicit shirt in the Parks.

While Walt Disney World and Disneyland are most famously known for providing quality entertainment for Guests of all ages, one thing that may slip past most Guests’ thoughts is the rules they must follow while in the parks.

While the Disney Parks are filled with attractions for both younger ad older Guests, it’s crucial for Disney to maintain its family-friendly atmosphere throughout.

The Disney Dress Code has been in the news a lot this year – most recently after a Guest entered Disneyland Resort wearing an inappropriately sexual tee shirt but wasn’t forced to change. In another incident this summer, a Guest wore a full-length ball gown to Disneyland Park and was told to change because it was a safety issue.

We also saw a massive debate form around one Guest’s very explicit tattoo that they showed off while strolling through Disney. To put it simply, there will always be a dress code, and there will always be Guests who break that code. Another example of this was shared on TikTok, in which one Guest was “cited” for their explicit t-shirt.

You can check out the full video down below:

As you can see, the Guest was given a voucher for a new shirt to replace the one deemed “inappropriate” by Disney. Disney’s dress code is intentionally left vague so that Cast Members can interpret it as necessary. The Guest shared another video showing what the shirt looked like we can honestly say we’re not surprised at all that they got a citation.

The shirt featured a nude female on a pool float, something that Disney certainly would not want any of their Guests seeing while inside the Parks. From Disney:

What are your thoughts on Disney’s dress code?