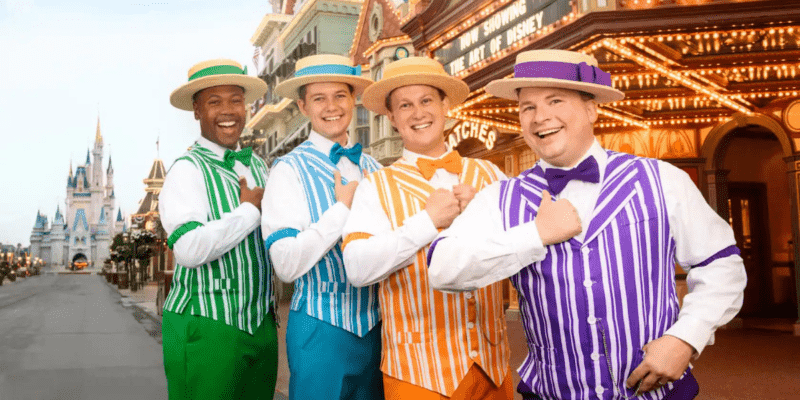 A Cast Member revealed a fun, little-known fact about Disney entertainment in an interview. Want to hear about it too?

While millions of fans are delighted with the different entertainment offerings every year at Disneyland Resort, Walt Disney World Resort, Disneyland Paris, Hong Kong Disneyland, Tokyo Disney Resort, and Shanghai Disney Resort, fans can’t know every detail behind the monstrous productions and processes required to carry out all of Disney’s live performances. However, a Cast Member shared a rather interesting fact, giving fans some insight into one of Disney’s most popular entertainment offerings.

The video was shared by Ilana (@disneymommagic) on TikTok. In it, we can see Aaron, one of the two Dapper Dans in red stripes at Walt Disney World Resort at the time, explaining how he came to wear this bright-colored outfit.

“Well, when I got here today, that’s what they had for me,” said Aaron in true Dapper Dan fashion, making a “dad joke.” Aaron then proceeded to explain that the red Dapper Dan, at least in Walt Disney World, is the Dapper Dan that knows more than two voice parts for their performance. “Yellow or gold for tenors, purple for leads, light blue for bases, uh, the green, um, for baritones,” explained Aaron pointing at the voice — or role — of each Dapper Dan during their performance.

Aaron later commented that he had been with the group since 1996, so he knows all four parts of the Dapper Dans’ performances, adding that, until the day the video was recorded, it had never happened that two people needed to be in red. “Roger is the only other person that wears red,” said Aaron referring to his fellow Dapper Dan in red, who also knows all four parts of their performance.

This fun and little-known fact is undoubtedly something many of us will keep in mind next time we have the pleasure of hearing the Dapper Dans perform on Main Street, U.S.A., at Disneyland Resort and in the Magic Kingdom at Walt Disney World Resort. The Dapper Dans have several performances throughout the day. You can click here to learn more about their schedule at Walt Disney World, and click here for their Disneyland performances.

Did you know this about Disney’s Dapper Dans? Let us know in the comments below!