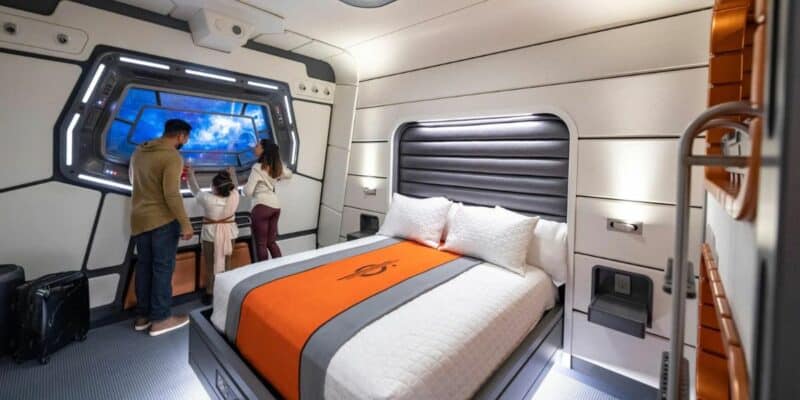 This adventure comes with a hefty price tag, starting at $4,809 for two Guests. For this reason, Guests expect a perfect, high-quality experience when they board their shuttle to the Star Wars hotel.

While some have said the Star Wars: Galactic Starcruiser is underpriced, most disagree. Guests have criticized the “lazy” theming and tiny rooms. This week, a former Disney Cast Member took to social media to share his thoughts on the Starcruiser:

The former Cast Member noted that Star Wars: Galactic Starcruiser has faced “challenges since it first opened, mainly due to the price.” But he aimed to speak about issues he noticed in online information about the experience other than the hefty investment, as he has yet to visit.

He mentioned a moment in a show onboard the Galactic Starcruiser when Rey switches out her lightsaber by clumsily setting it down and switching it out, calling it “tacky as h*ll.”

“You couldn’t come up with something else where say, Kylo Ren busts something, and some CO2 smoke comes out, and she could switch it out in the smoke or something like that? Instead of bending down? Come on,” the ex-Cast Member said.

He also mentioned issues with mediocre onboard activities, like Star Wars bingo and line dancing. Mainly, though, the former Cast Member said Walt Disney World Resort needs to drop the two-day storyline and allow Guests more input on their adventure.

“You create the Resort, so you just come and go as you want. You can do the add-on meal package where you can eat as much as you want if you want to do that,” the former Cast Member suggested. “All those other things are just scheduled events that you schedule as you go along. And then offer transportation to Galaxy’s Edge as much as they want to go back and forth.”

“Just open it up. Make it always like it’s an ongoing thing and drop some of the storyline,” he continued. “If you want people, Guests to be able to do certain missions, then create smaller missions. But it’s just too forced.”

What do you think of the former Cast Members ideas for Star Wars: Galactic Starcruiser?