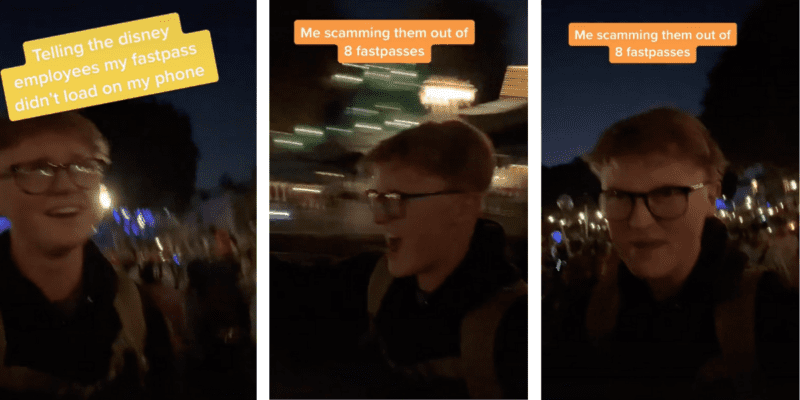 At Magic Kingdom, Disney’s Animal Kingdom, EPCOT, and Disney’s Hollywood Studios in Florida, purchased Genie+ and Individual Lightning Lane reservations are linked to your MagicBand. However, MagicBands aren’t coming to Disneyland Resort until October 29, meaning that Guests must show their Lightning Lane passes to Disney Cast Members on their phones to access the faster queues.

If your phone is dead or not getting service, how do you prove you have an Individual Lightning Lane or Disney Genie+ reservation at Disneyland Park or Disney California Adventure? You can go to Guest Services, buy a phone charger, or hope that a Cast Member will take your word for it. That’s where Utah TikToker Holden Bullock (@holdenbullock04) went wrong this week.

Bullock shared a video of himself walking through Disneyland Park, using a TikTok sound to call Cast Members “dumb” for believing him and his party when he told them they had eight Lightning Lane passes on their phone:

♬ Thank You For Being So Dumb – rigby‼️

“Disney can’t win all the time,” Bullock wrote, saying that he “scammed” the Disney Park.

Many Disney Cast Members responded, saying they know people scam the system but sometimes can’t put up a fight. “We know we just don’t get payed enough to care sometimes,” @dancermelissa97 wrote.

Some complimented Bullock’s ingenuity but told him to keep “the secrets.” “I don’t understand why when people figure out a loophole that they want to go ahead and expose themselves and the trick,” @gamer_athletics said.

But most Disney fans admonished Bullock for this Disney “hack.” A former Cast Member, @sthooch, made a video response that got hundreds of likes and supportive comments:

The former Cast Member said that while it’s objectively wrong to scam Disney out of FastPasses, it wasn’t his primary concern. Hopping into the Lightning Lane line affects not only paying Guests but also Guests utilizing Disability Access Service (DAS) who can’t wait in long queues.

He also called out Bullock’s account for questionable content about race and disabilities, furthering his concerns about taking advantage of the Disneyland Lightning Lane queues. “It really reeks of privilege,” he said.

“Made my day thx bro,” Bullock sarcastically commented on the video.

What do you think of this Lightning Lane “hack?”