First Look at H.E.R. as Belle In 'Beauty and the Beast' - Inside the Magic 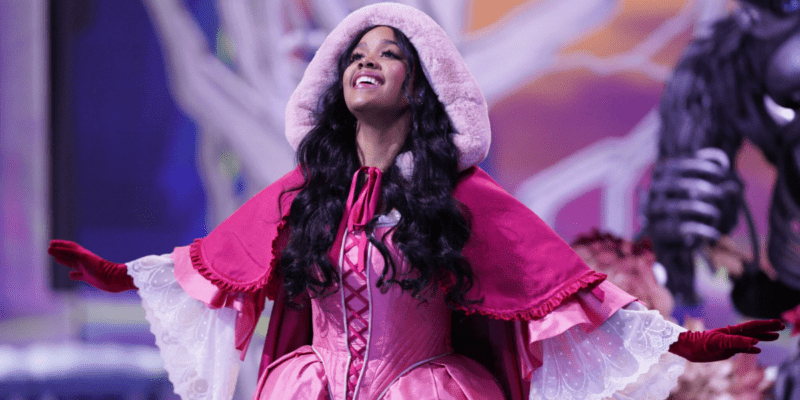 Take a first look at the tale as old as time reimagined for your television screen!

Following the success of Disney’s live-action Beauty and the Beast (2017), starring Emma Watson and Dan Stevens, The Walt Disney Company announced a 30th Anniversary Special to celebrate the original animated Beauty and the Beast (1991). This week, ABC shared a first look at photos from the special.

Earlier this year, Disney announced that the world would see a Black and Filipino Belle as H.E.R. – Gabriella Sarmiento Wilson – was cast in the leading princess role. As revealed at D23 Expo, Josh Groban will star as Prince Adam/Beast, Martin Short as Lumière, Joshua Henry as Gaston, David Alan Grier as Cogsworth, and Shania Twain as Mrs. Potts. Rita Moreno will narrate the special.

The Beauty and the Beast: A 30th Celebration will air on Disney-owned ABC on December 15, 2022, at 8:00 p.m. and stream on Disney+ a day later. It’s described as a “hybrid” experience, with the original announcement reading:

The hybrid special will be directed by Hamish Hamilton and executive produced by Jon M. Chu. Unlike previous musicals on ABC, it will be shot in front of a live studio audience but not aired live.

Beauty and the Beast is world-renowned as part of the golden age of animation. Alan Menken received an Academy Award and a Golden Globe Award for the film’s score, and Don Hahn received a Golden Globe for Best Motion Picture. From Disney:

Be our guest and join the beloved, independent Belle (Paige O’Hara) and the Beast (Robby Benson) with the soul of a prince as they cast an enchanting spell like never before. Disney’s beloved modern classic, the first animated feature film in the history of the Oscars nominated for Best Picture (1991). The music you’ll never forget, the characters who will fill your heart and the magical adventure about finding beauty within all come to spectacular life.

Are you excited about ABC’s Beauty and the Beast 30th Anniversary Special?

Comments Off on First Look at H.E.R. as Belle In ‘Beauty and the Beast’