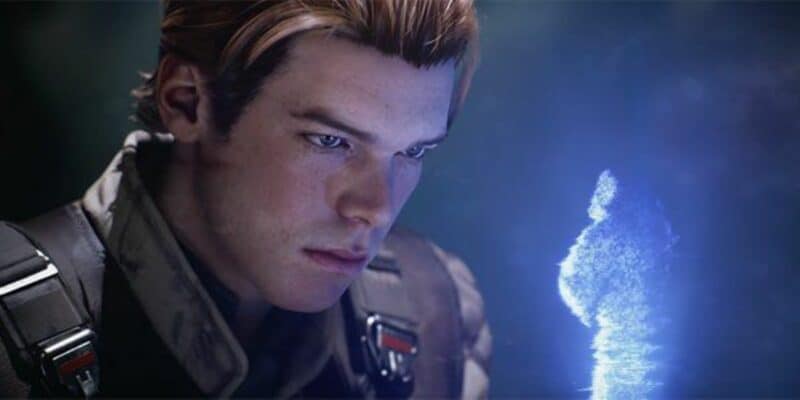 Since The Mandalorian, fans have loved Cameron Monaghan as Cal Kestis, a Jedi padawan who left his master after Order 66 to live under the Empire as they killed more of his people.

Unlike other Star Wars projects under the Disney umbrella, Jedi: Fallen Order was one of the first to delve deep into exploring how someone like Cal could live during a turbulent time like this and still live. Inquisitors hunted Jedi all over the place. The Empire continued taking over certain parts of the galaxy.

Nowhere was safe, and Cal was thrown into a world he didn’t want anything to do with until he met a former Jedi, Cere Junda, who showed him a new path.

Who is Cal Kestis?

A former padawan to Jedi Master Jaro Tapal, who was stationed at Bracca when Order 66 happened. Tapal gave up his life so Cal could leave the ship as his final words to his apprentice were, “trust only in the force,” and handed Cal his lightsaber.

Played by Cameron Monaghan, Cal Kestis is a younger Jedi with some rare skills. He uses psychometry, a force ability that lets him relive previous moments from whatever he touches. This gives him good insight into what has happened around him while also allowing him to garner truth from what people have done. Another ability Cal has is that he can use Force stasis (freeze objects) which is useful when under fire.

What Projects Has Cal Kestis Appeared In?

Related: Dave Filoni Might Be Gearing Up to Break ‘Star Wars’ Canon Again

At the moment, Cal Kestis has only appeared in one project, Jedi: Fallen Order, but he will return for two more projects, Jedi: Battlescars and Jedi: Survivor. Most Jedi already have their story fully explored, but Lucasfilm might be telling many more stories with the Jedi as his story is just getting started.

With Jedi: Survivor set during the events of Obi-Wan Kenobi — 10 years after Star Wars: Episode III — Revenge of the Sith (2005) — and it wouldn’t be hard for Lucasfilm to continue Cal’s journey until The Mandalorian if they wanted to.

What is Jedi: Fallen Order?

“You know I’ve been alone for…a while now. Without any…purpose. Just hiding. It’s no way to live. Not for a Jedi. Or a droid. Maybe Cere was right. Maybe we’re done hiding.” – Cal Kestis to BD-1

Jedi: Fallen Order is EA’s first Star Wars single-player video game. Right before the project’s release, fans had only received multiplayer games since Disney made a deal with EA to make Star Wars video games exclusively. The game was well received as it launched at the best time, alongside The Mandalorian, giving fans who love video games something to enjoy with a great Star Wars story.

Cal Kestis is so well-liked that fans are hoping that the character enters a live-action Star Wars project soon. As a Jedi who escaped Order 66, it’s possible he could survive and end up in shows like The Mandalorian or appear in other series like Diego Luna’s Andor.

Cal Kestis was one of the few Jedi who escaped the Empire and lived in solitude, working in the scrapyard taking apart old Clone Wars vessels. One day this all changed when Inquisitors began searching for a Jedi once the force was used by Cal to save one of the workers.

After they threaten to kill all the workers, Cal manages to stop them but is forced to run away as the Inquisitors are too powerful for him. He manages to escape only because a mysterious ship comes to his aid and takes him to safety.

Here’s a brief description of the video game before jumping further into the story:

Kestis joined the crew of the starshipStinger Mantis after they rescued him from the Inquisitors. Over the course of their journey, Kestis befriended the droidBD-1, the former Jedi Cere Junda, the Mantis‘ captainGreez Dritus, and the NightsisterMerrin. They attempted to locate Eno Cordova’s Jedi holocron, which contained information that was vital to creating a new generation of Jedi. Though they retrieved the holocron while surviving an encounter with the Sith LordDarth Vader, Kestis chose to destroy the holocron in order to protect the galaxy’s Force-sensitive children from the Sith. By then, Kestis had been recognized as a fully-trained Jedi by his new mentor.

A Holocron full of force-sensitive children was precious for the Empire as they could train a whole wave of new Inquisitors, but Cal knew that if the Sith got ahold of the Holocron, the Jedi Order would never survive. So he acquired the Holocron, and while Cere thought he would rebuild the Order, Cal decided to leave the order’s fate with the force as he destroyed the Holocron, and all the information inside was lost.

What to Expect From Jedi: Battle Scars

Cal Kestis will return first for a novel called Jedi: Battlescars which is set in between the events of Jedi: Fallen Order and Jedi: Survivor. Cal Kestis is still fighting the Empire, but they grow stronger every day. Surprisingly, Battlescars will help fans get to learn more about the character right before his next adventure in Jedi: Survivor. The book releases one week before the upcoming sequel on March 7, 2023.

Here’s a brief description of what to expect in the upcoming novel:

Cal Kestis has built a new life for himself with the crew of the Stinger Mantis. Together, Cal’s crew has brought down bounty hunters, defeatedInquisitors, and even evaded Darth Vader himself. More importantly, Merrin, Cere, Greez, and faithful droidBD-1 are the closest thing Cal has had to a family since the fall of the Jedi Order. Even as the galaxy’s future grows more uncertain by the day, with each blow struck against the Empire, the Mantis crew grows more daring.

On what should be a routine mission, they meet a stormtrooper determined to chart her own course with the help of Cal and the crew. In exchange for help starting a new life, the Imperial deserter brings word of a powerful, potentially invaluable tool for their fight against the Empire. And even better, she can help them get to it. The only catch – pursuing it will bring them into the path of one of the Empire’s most dangerous servants, the Inquisitor known as the Fifth Brother.

The Fifth Brother is the main villain for the Novel as Cal learns from an imperial deserter of a valuable tool the Empire has and the only way to get to learn more about it is to confront the Inquisitor. So far, Cal has avoided the Inquisitors and is now going after one of them. It should be one crazy adventure for fans.

What to Expect From Jedi: Survivor

At long last, Jedi: Survivor will finally release on March 15, 2023. Cal Kestis has grown up a few years, and now is trying to survive as the Empire hunts him down. He will once again be off an adventure that leads him to uncover something he never would expect. A chamber holding a being who has been alive for potentially hundreds of years.

Not many details have been shared leaving a lot of the story to be kept underwraps as the project has secretly been in development over the past couple of years. What we do know is that Cal will end up fighting more bounty hunters, delving deeper in figuring out who is the mysterious person he finds in a facility, facing Separatist forces potentially programmed by someone or an old Separatist outpost.

Here’s a brief description of the highly anticipated sequel:

Star Wars Jedi: Survivor picks up five years after the events of Star Wars Jedi: Fallen Order. Cal must stay one step ahead of the Empire’s constant pursuit as he continues to feel the weight of being one of the last remaining Jedi in the galaxy.

Cal Kestis’s story is far from over, but it has only really just started as his story will continue in a few months and fans will of course wait for his eventual live-action appearance. Until then, trust only in the force.

Do you want to see Cal Kestis in live-action?