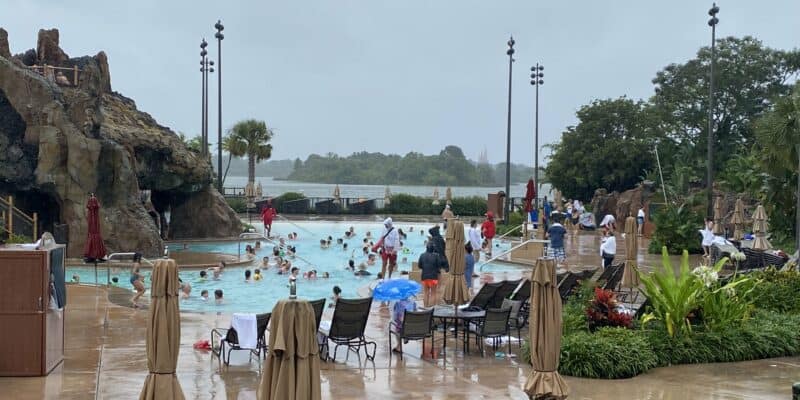 Due to the approaching tropical storm, a warning has been issued for Orange and Osceola counties. This means that the Walt Disney World Resort is also under this new warning.

Walt Disney World consists of lots of sun thanks to the Resort residing in Florida but also sees several thunderstorms and random pop-up showers quite frequently as well.

If you have an upcoming vacation, be prepared to not only bring sunscreen and sunglasses, but ponchos and extra clothes as the rainstorms in Orlando during the summer months can come on suddenly. Subtropical Storm Nicole has been approaching the east coast of Florida just weeks after Hurricane Ian devastated the same areas.

Latest forecasts are now suggesting that Nicole will make landfall as a CAT 1 hurricane on Wednesday before moving across Central Florida and onward toward Magic Kingdom, EPCOT, Animal Kingdom and Hollywood Studios as well as the Disney Springs area.

We have seen the Disney theme parks flood a lot as of late due to the rain storms hitting the Orlando area. Hurricane Ian forced a lot of Orlando theme parks to close including Walt Disney World and Universal Studios.

It is important for Guests to keep in mind that having a stormy day at the parks could really change the trajectory of your day at times as select Disney World attractions may close due to the rain. With this being said, there are many attractions at the theme parks located indoors that Guests can enjoy while they wait out the storm. Make sure to download the My Disney Experience app onto your phone as Disney will continue to update wait times and ride closures within this app.

Be sure to check back here at Inside the Magic for updates.