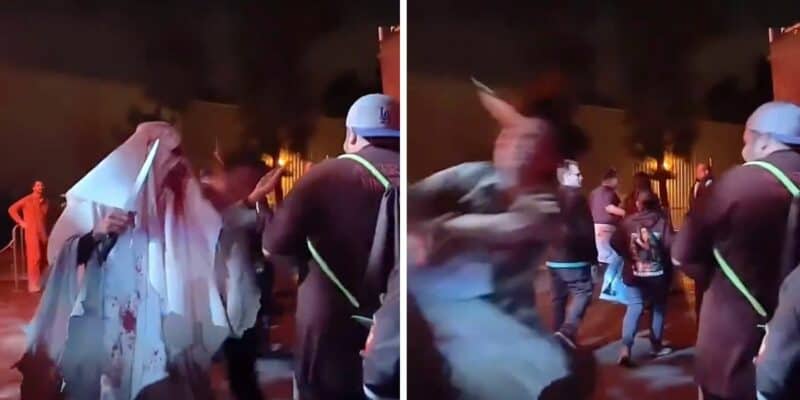 Universal Studios is known for its thrilling attractions and fun atmosphere, but if you have ever visited during Halloween, then you already know it’s an entirely different experience.

In addition to the haunted houses, scare zones, and entertainment shows, you can enjoy select Universal Studios Florida attractions like Hollywood Rip Ride Rockit, MEN IN BLACK: Alien Attack, and others. For more information and details, visit the official Universal Orlando website.

Of course, most of the fun comes from the employees who get into character in order to scare Guests.

Accurately called “scare actors,” these employees are critical to the overall Halloween experience at the Parks. Unfortunately, one of them was recently attacked.

A video of the incident was shared online, going semi-viral within the theme park community. In the video, a scare actor is walking around the Park at night when a Guest comes in and tackles the actor to the ground.

Guests who witnessed the incident stood in shock after the actor was attacked. To clarify, the Guest who captured the video said this in the caption:

“I didn’t see the before but it seems this scare actor accidentally touched his gf so he immediately went to violence instead of taking it up with a supervisor. This guy has major anger issues to do this. I heard he was arrested and banned but I’m not 100% sure.” 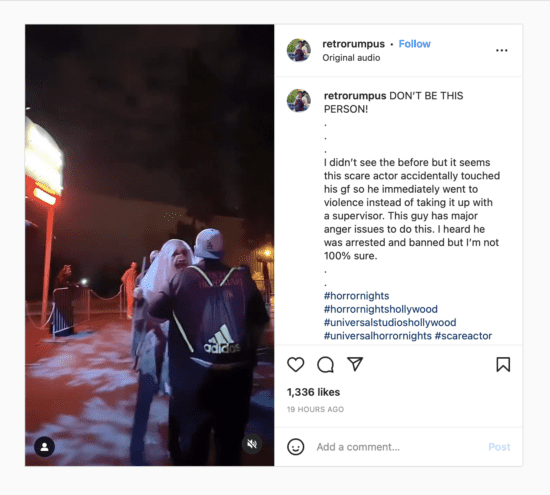 “Don’t f****** touch my f****** girlfriend,” says the attacker before they quickly flee the scene. The video abruptly ends there, so we are unsure what took place following the incident. Nothing has been officially reported by the Park.

The Team Members that work at Universal Studios, the Cast Members at Walt Disney World, and all other theme Parks employees are crucial to the overall experience and part of the reason they can exist in the first place. It is critical to treat them with respect, and we always urge Guests to be respectful.

We will continue to monitor this story and update our article as more information becomes available.