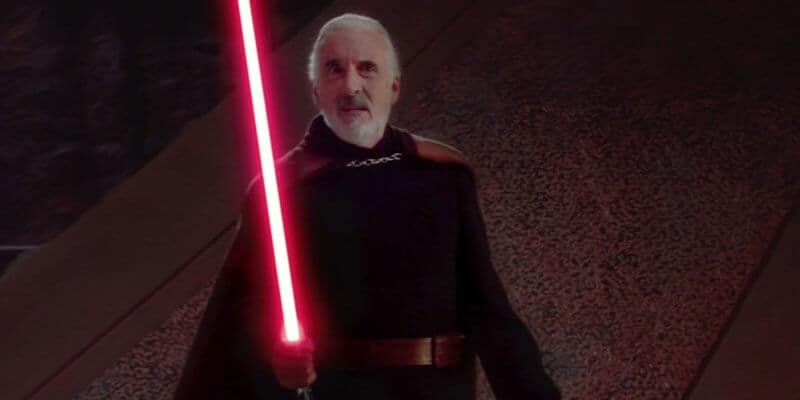 As seen in The Clone Wars, Dooku is a Sith Lord and definitely one of the more elegant lightsaber duelists in the galaxy. Unlike most villains, Dooku had an air of elegance as he wasn’t purely evil. Sure, he dabbled in evil and sinister plots here and there, but he truly believed that his conquest was necessary to make the galaxy a better place.

Unlike most Star Wars characters, Dooku has a lot of different dimensions to his character as he has a unique life that most Jedi or Sith can’t relate to.

Where did Dooku live?

Dooku may have lived most of his life on Coruscant, but he was born as the son of the Count of Serenno. Count Gora was a wealthy and powerful man, but once he saw Dooku’s force abilities, he was frightened by his son. He contacted the Jedi Order and demanded they take his son.

As the Jedi traveled over to Serenno, Gora couldn’t stand the sight of his son and took off Dooku’s clothes, and left him in the forest naked. The Jedi arrived and saved Dooku, and brought him to the Jedi Temple. From there, Dooku learned his ways in the force from the Jedi and even revisited Serenno.

There, he reencountered his father once he saved some people from debris and learned the truth. His father, Count Gora, demanded that Master Yoda never bring Dooku back to Serenno. Then, Dooku learned that his father abandoned him and left him naked in the forest until the Jedi saved him.

Was Dooku a Jedi?

Dooku was a Jedi who got the honor of serving as a padawan under Master Yoda. This experience was hard for Dooku as Yoda focused a lot on meditation and skills that were challenging for the young Jedi to learn. This led to their training being difficult at points, but Dooku proved himself as a Jedi and passed the trials to become a Jedi Knight.

Later, Dooku would teach Qui-Gon Jinn, and then the lineage would continue with Qui-Gon teaching Obi-Wan. Tales of the Jedi showed a little bit of their relationship and how they both worked together. It was then that Dooku began to see the corruption of the Galactic Republic and how it was failing to keep everyone safe and alive as others exploited the system for their own greed.

Why Did Dooku have a curved lightsaber hilt?

There are seven lightsaber art forms and Dooku specializes in Makashi. This form was perfect for dueling and a curved lightsaber helped Dooku efficiently use the form to its full advantage as it gave him better access to the types of strikes and parries that his form required.

His hilt also had a special button to shorten the blade of the lightsaber in case he needed a shorter blade to do better work against his enemies who might not expect it.

Why did Dooku leave the Jedi Order?

Corruption was a great tool being used by Senators and planets to achieve their own agendas. Dooku saw this plainly on several missions he was assigned. He saw how disobeying the council led to him gaining very little trust. Once he believed that the Sith would return, the council refused to listen.

They almost didn’t believe Qui-Gon once he explained that a Sith Lord attacked him on Tatooine. Dooku may have already been working for Sidious at the start of Star Wars: Episode I — The Phantom Menace (1999), but he was still in the Jedi Order. That changed once Darth Maul killed Qui-Gon.

Feeling betrayed and angry, Dooku visited Sidious and demanded answers for why the Sith Lord had his former apprentice killed. Palpatine explained that they both suffered losses as his apprentice died, but that’s the price for freedom. This secret meeting was ended once Master Yaddle approached the two.

Sidious believed that Dooku was plotting to kill him. With his loyalty tested, the Count fought Yaddle to prove that he was loyal to the Sith and no longer the Jedi, who failed him. In the end, Yaddle was no match and was killed by Dooku, and that was his last day as a Jedi since he became Darth Tyranus.

Count Dooku during The Clone Wars

As Darth Tyranus, Dooku helped orchestrate the Clone Wars. He had Syfo Dias appear to be murdered and used his alias to create a clone army for the Republic on Kamino. Right before Yaddle’s death, Dooku deleted Kamino’s records from the Jedi archives.

For the clones, Dooku hired Jango Fett and used his genetic makeup to create the template for the Clone army. This endeavor led Dooku to set everything in motion. When Obi-Wan was captured on Geonosis, Dooku did reveal the basics of this plot and how it was orchestrated, but Kenobi didn’t listen even though all of the pieces were laid out in front of him, proving that the Jedi were too blind to see the truth.

As the main leader of the Separatists, Dooku rallied several systems to his cause and created the Confederacy of Independent Systems, which fought the Republic after they declared war on their government. The Clone Wars was created, leaving Dooku to work alongside Asajj Ventress and Grievous in a war against the Republic.

How Did Dooku Die?

At the end of the Clone Wars, Grievous launched a fleet to invade Coruscant and capture the Chancellor. This assault included Dooku staying onboard Grievous’s ship and fighting the two Jedi who managed to land in the flagship. Obi-Wan and Anakin Skywalker.

Dooku enjoyed seeing the duo together as he rarely got to fight both Anakin and Kenobi at the same time, and he knew the war was coming to a close as his master, Darth Sidious, was soon to win the Clone Wars. This whole event was orchestrated to get Anakin to dabble in the dark side, but Dooku wasn’t aware that Anakin would be Palpatine’s new apprentice.

As the three dueled in Star Wars: Episode III — Revenge of the Sith (2005), Dooku quickly dispatched Kenobi by catching the Jedi master by surprise and using the force to keep him trapped. Now, it was just Anakin against the Count. Skywalker’s rage-fueled his attacks and soon, the Jedi Knight wasn’t using the light side of the force. The Dark Side was channeling inside of him.

Dooku thought this was good until Anakin managed to cut both of his hands off. Anakin caught Dooku’s lightsaber and held them, ready to take off his head. Palpatine told Anakin it was better to kill him. Dooku, in shock, looked at his master and realized what was happening. He was being replaced. His master told him lies. There wasn’t going to be a role for him in his Empire. He was a pawn for the Sith. Anakin listened to Palpatine, and Count Dooku died, thus marking the beginning of the end of the Clone Wars.

Do you wish to see more of Count Dooku in Star Wars? Let us know!