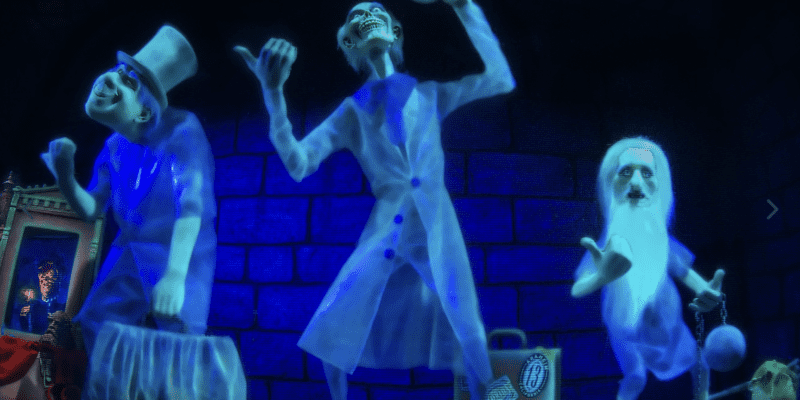 Now, something mysterious might be coming to the Disney Parks — and it has to do with a fan favorite, the Haunted Mansion!

The Walt Disney Company appear to be trying out something interesting over at the Tokyo Disney Resort’s Tokyo Disneyland, and its success could mean something similar happening at other Disney Parks. Recently, a website was quietly released, as well as some very scant information, about something Disney are calling “Disney Story Beyond” — and it seems to be tied into Disney Park lore and story.

The website for “Disney Story Beyond” announces something happening “January 2023”, along with images of a darkened, foggy Haunted Mansion. The mysterious website sports the tagline to hint at this new initiative:

(translated) Moving beyond the stories you know.

The site goes on to detail:

(translated) Every area and attraction at Tokyo Disney Resort has a story.
Set in various countries and eras, many fascinating stories unfold with a multitude of characters.
Disney Story Beyond invites you to a new world beyond those stories.

Continuing with their spooky vibe, the website gives some background on a “Ghost Registry”, and prefaces peculiarly:

(translated) Now, the stage is set in the Haunted Mansion, where 999 happy haunts reside.
In the Mansion’s library, there is a single, ancient book that has been passed down through the generations.
Within this book are the recorded stories of every spiritual inhabitant, meticulously documented by those who have worked in the Mansion over the years.
What will now commence is the story of the ghosts recorded in this very book.
Come, as we cast a spotlight — and expose those once shrouded in mystery.

It’s interesting to note that Disney have decided to release this new Haunted Mansion… Event? Update? In January of next year, instead of during the festive Halloween season — but there could be a reason for that, tying to the actual ride itself. In fact, the date of the 23rd might be significant as January 25th is when Tokyo Disney Resort reopens the Fantasyland ride to the Tokyo Disneyland general public again, after the removal of the Night Before Christmas holiday overlay, Haunted Mansion Holiday, and a refurbishment of the ride. Could this be hinting at something new coming to the actual Park, or a change to the Haunted Mansion itself? Or even something to do with the upcoming Haunted Mansion movie starring Jamie Lee Curtis (Madame Leota), Rosario Dawson (Gabbie), Jared Leto (Alistair Crump/Hatbox Ghost), Tiffany Haddish (Harriet) and Owen Wilson (Kent) as a priest (plus Winona Ryder in an undisclosed role) — in another attempt by Disney to reboot the franchise after the less-well received Eddie Murphy movie from the early 2000s. Disney appears to be realizing the power of the Haunted Mansion as an intellectual property, with several Haunted Mansion-adjacent projects of late, including Disney+’s Muppets Haunted Mansion (2021).

Currently, the secretive website displays silhouettes of well-known characters and ghosts from within the Haunted Mansion ride itself — but some have been yet to be fully revealed, including the Bride with the beating heart in the attic (yes, Tokyo Disney Resort’s Tokyo Disneyland still has this intact), potentially Constance Hatchaway. Interestingly, the Hatbox Ghost is absent — likely as Tokyo Disney Resort never had the character in its version of the Haunted Mansion, is modelled after the one in Walt Disney World’s Magic Kingdom, with a similar exterior that isn’t New Orleans-inspired as the one in the Disneyland Haunted Mansion is.

However, there have been several already revealed so far. The first to be revealed are the Hitchhiking Ghosts’ identities — Phineas, Ezra and Gus:

(translated) The Hitchhiking Ghosts. Have you ever felt their presence near you when you visited the Mansion? Their names from left to right are Phineas, Ezra, and Gus. Who is the one carrying the mysterious bag?

The next character revealed is what can be approximately translated to be “The Ever-Withering Gentleman”. Often presumed to be Master Gracey by Disney Park enthusiasts, this character is the likely Picture of Dorian Gray-inspired portrait that ages rapidly before your eyes, in the Haunted Mansion:

(translated) This is a man shrouded in mystery. Some of the ghosts seem to call him “The Withering Gentleman”.

The third revealed so far is Sally Slater, the tightrope walking girl standing over a waiting alligator’s jaws:

(translated) Her name is Sally Slater. She is popular in the Mansion as a ghost with an excellent sense of balance. Even so, to think that she was honing her sense of balance in such a place…

All of this just raises more questions than it answers, seemingly. However until more is revealed, it seems like we’ll either have to wait or make very smart guesses as to what this all means. Either way, we’re always ready to “hurry back”, hop into our Doom Buggy with the Ghost Host, and join the 999 Happy Haunts, regardless!

The promotional video teaser for Disney Story Beyond can be viewed here:

What do you think “Disney Story Beyond” could be about? Do you think this could make its way to other Disney Parks? Share your thoughts in the comments below!