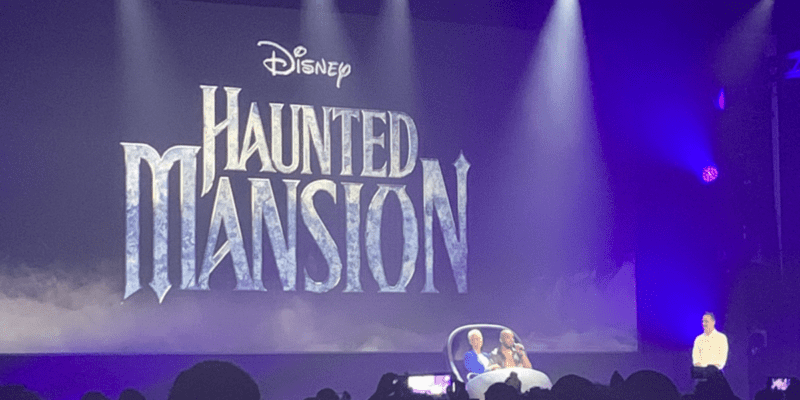 Jamie Lee Curtis stars Madam Leota alongside Jared Leto, confirmed at D23 Expo last night to portray The Hatbox Ghost! D23 attendees got a new-for-the-room only look at a trailer for the film, described by Deadline:

“A car pulls up to a mansion in the depths of night. The mansion, our narrator says, was discovered fully built after a fire in 1788. ‘That’s when things started to get weird,’ he continues, ‘[with] a string of dramatic events, paranormal attacks, yellow fever, explosions. There’s no records, only stories.’ We then follow a character played by Tiffany Haddish and a priest portrayed by Owen Wilson as they explore hidden areas of the darkly historic house with a group of kids, finding, behind a painting, a room that had ‘not been touched in centuries.’ The trailer also introduces us to a tour guide played by Lakeith Stanfield, with further flashes to characters played by Rosario Dawson, Danny DeVito and more.”

Curtis appeared at D23 in a Doombuggy from The Haunted Mansion at Magic Kingdom and Disneyland Park, silently whisking away director Justin Simien:

Simien shared a photo of his old Cast Member ID from Disneyland, where he loved to ride The Haunted Mansion and Pirates of the Caribbean.

Brush up on your The Haunted Mansion trivia ahead of the remake of the 2003 film starring Eddie Murphy, Marsha Thomason, and Terence Stamp. From Disney:

Eddie Murphy stars as a real estate agent whose family comes face-to-face with 999 grim, grinning ghosts in the creepy old Gracey Manor! Now, with the help of supernatural psychic Madame Leota, they must hilariously battle to break the mansion of its age-old curse, and do it before the clock strikes 13!

Are you excited about Haunted Mansion?