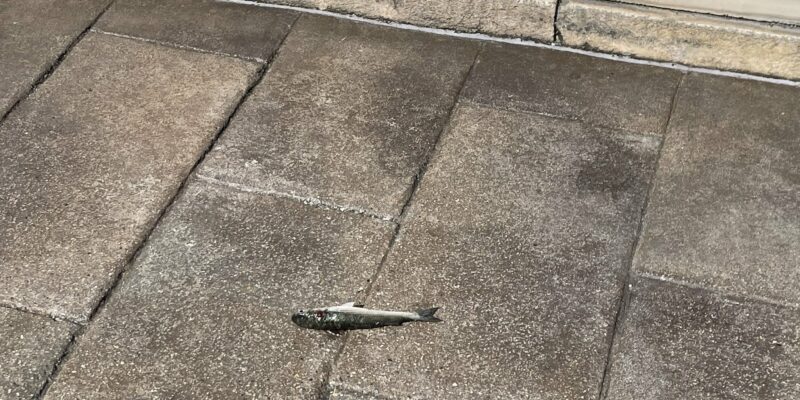 It seems like the day has finally come when fish fly.

What would have otherwise been a normal thrill-seeking, attraction-riding, parade-viewing and food-eating day turned to confusion as Guests walking around a seemingly regular Disney Resort encountered dead fish falling from the sky.

The Guest who first reported on the fish’s existence at the Tokyo Disney Resort was user @370506k on Twitter, who was shocked, describing the fish as having fallen from the sky as they were walking around casually on the Disney property — and it didn’t stop at one:

Other Disney fans were quick to respond to this baffling phenomenon, offering their insight on the species of fish and responding to the original poster’s initial suspicion that it was the doing of birds flying overhead. @370506k added that it wasn’t just a single fish, though:

(translated) @vivavenom0: Is it a mullet ? 🤔
Probably a bird dropped the one it caught.😂
@370506k: I was surprised when two fell down lol

Making a connection to Disney itself, user @D26352313 offered a somewhat obscure reference that perhaps only some of the biggest Disney nerds might recognize:

It’s the work of Tippy Blue~🐟

The joking response references the character of TippyBlue is a Friend of Duffy the Disney Bear who belongs to none other than Mickey Mouse himself — TippyBlue is a seagull character who presides over the Cape Cod Port of Call (as the themed lands are called in Tokyo DisneySea) and can be seen in Mediterranean Harbor.

Apparently, this phenomenon has actually happened before at the Disney Parks — in fact, @Mickesta102125 adds that they also encountered random “flying” fish before:

It fell when I was on the trail before 🐟
Maybe, it happens sometimes when it’s Sea 🥴

This user responds to the original poster with a rough date on when their own experience happened:

(translated) @D26352313: This was my first time seeing this 🐟 lol
@Mickesta102125: Actually, it happened for me around the 35th anniversary‼️I think it was a rare and valuable experience‼️

The Tokyo Disney Resort’s 35th Anniversary took place in 2018 — so it appears that this has truly been a reoccurring incident for visitors to the Disney Park. In fact, the name “Tokyo DisneySea” might give an indication as to why fish were spotted at the Disney Resort in the first place — apart from being themed after the Society of Explorers and Adventurers (S.E.A.) of Disneyland Resort and general Disney Park fame, the Tokyo Disney Resort is located fairly close to the actual ocean. Either way, it must be extremely surprising to be walking around a Disney theme park when all of a sudden, you’re accosted by flying, dead fish from the sky!

Have you ever encountered something similar before? Do you have a theory as to how this happened? Share your thoughts in the comments below!