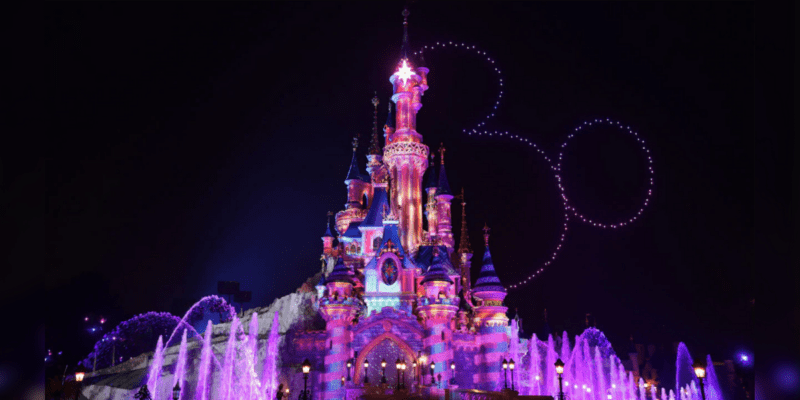 This Disney Park recently added a significant upgrade to its nighttime spectaculars, doubling down on Disney’s Environmental commitments.

The Walt Disney Company has a strong commitment to environmental sustainability, “protecting the planet and delivering a positive environmental legacy for future generations as we operate and grow our business.” With measurable goals in reducing waste, zero emissions, lower impact products, and building sustainably, there is no doubt The Walt Disney Company is on the right track to becoming a more sustainable company while providing Guests with some of the most magical experiences in the world.

Related: Disney World Is Legally Allowed to Build a Nuclear Plant in Florida

These efforts included the recent introduction of a significant upgrade at Disneyland Paris, making the nighttime spectaculars at the Parisian Disney Park even more magical.

Disney Cave 0f Wonders (@Cave0fWonders) shared a video of the newest addition with a delightful sight of the Sleeping Beauty Castle. You can see the video below.

Magical Evening to All!

Disneyland Paris remains at the top of Disney Parks in innovations and the use of alternative resources in the Park’s nighttime spectaculars. A notorious example of this is the use of drones in the Parisian Disney Park’s nighttime spectacular with Disney D-light, bringing spectacular choreographies that light up the Parisian sky with over a hundred drones. The Park has used these drones to create even more breathtaking spectaculars during the grand opening of Avengers Campus at Walt Disney Studios Park and the Bastille Day celebrations at Disneyland Park.

This year, in addition to the Disney D-Light drone display which was designed for the 30th Anniversary celebration, lighting up the Disneyland Paris’ sky every night, Guests will enjoy the comeback of “Disney Dreams®! of Christmas”. This famous nighttime spectacular – which has dazzled a generation of Guests – will return more beautiful than ever as part of the 30th Anniversary celebration!

This magical show combines fireworks, dancing fountains and Christmas songs, along with projections of scenes immersing Guests into the worlds of Disney classics, such as Frozen and Pixar movies, such as Toy Story! The show will be even more dazzling and elevated for this special year, as a touch of innovation has been added to it! Sleeping Beauty Castle’s rooftops will be even more sparkling thanks to a brand-new LED* technology that makes it possible to create effects that have never been seen before in a Disney Park and that are synchronized

Would you like to see something similar come to Disneyland Resort and Walt Disney World Resort? Let us know in the comments below!