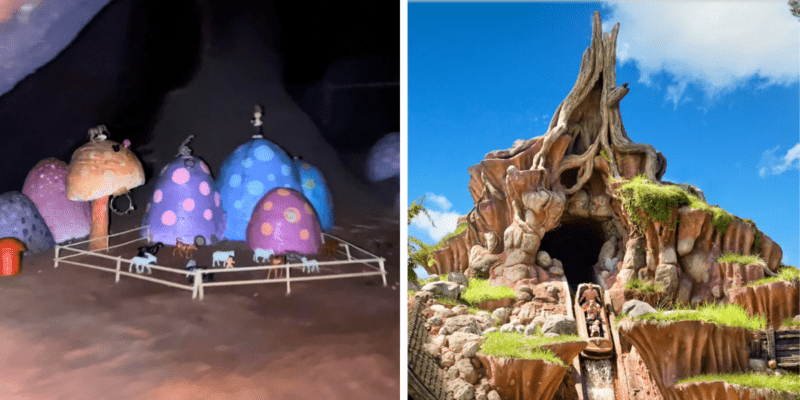 We reported some strange googly-eyed rocks on Splash Mountain at Disneyland Park on Monday. Though no one knows for sure, it’s assumed that some Splash Mountain Cast Members added these rocks to the classic Disney Parks log flume ride:

Splash Mountain will reopen as Tiana’s Bayou Adventure at Walt Disney World Resort and Disneyland Resort in 2024. Though the ride is closing, many fans are disappointed with its current state and lack of maintenance on the attraction.

Disneyland Resort may not be updating the ride, but its Cast Members are! Reddit user u/SpookyDood93 shared a photo of some mushrooms on the ride, which were recently decorated with farm animal figurines and a wooden fence:

There’s a mushroom farm inside of Splash Mountain! from Disneyland

No closing date has been publicly announced for Splash Mountain in Frontierland in Magic Kingdom at Walt Disney World Resort or Critter Country at Disneyland Resort. The Song of the South (1946) ride will remain the same at Tokyo Disneyland, though the Disney Park recently removed the ride’s anthem, “Zip-A-Dee-Doo-Dah,” from its music loop. From Disneyland:

Are you excited about the Splash Mountain retheme?