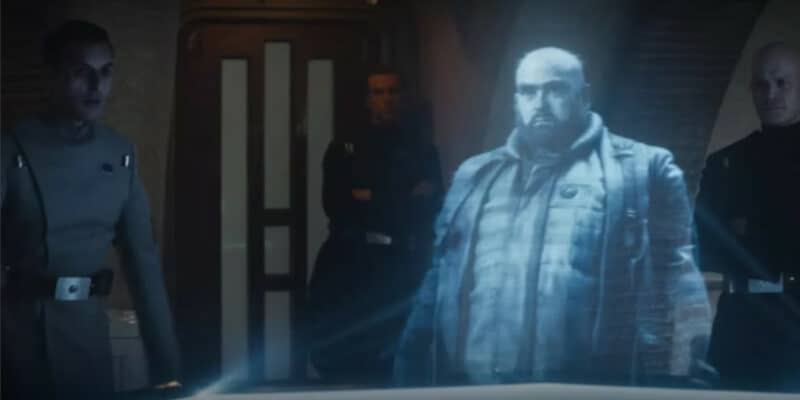 Finally, a face to the name! In addition to a few other things…

We’ve heard his name, but now we have a face, albeit holographic, to put to the name. Anto Kreegyr, the mysterious rebel made his appearance in Star Wars: Andor Episode 11 “Daughter of Ferrix as part of the torture Cassian Andor’s (Diego Luna) friend Bix Caleen (Adria Arjona) had been put through. The ISB was convinced that she had introduced Cassian (Luna) to Kreegyr, as part of a major rebellion plot.

Fortunately for Luthen Rael (Stellan Skarsgård), and unfortunately for Anto, the ISB thinks the latter is the ‘Axis’, or the key to the whole rebellion, the one pulling the strings. This, along with the intelligence Rael (Skarsgård) learned from his inside man, that the galactic empire was aware of Kreegyr and his planned attack, forced Rael’s (Skarsgård) hand. He had a decision to make: alert Kreegyr, and tip off the ISB that there was a mole in their organization, or, let Kreegyr and his thirty men proceed with the attack, likely going to their death.

Ultimately, Rael (Skarsgård) makes the decision to let Kreegyr take the fall, deeming that his sacrifice will ensure the survival of their inside source, and the rebellion. Even to a hardened partisan like Saw Gerrera (Forest Whitaker), this comes as a blow. If he’s willing to sacrifice someone as important as Kreegyr, and his thirty, who is safe?

This decision goes to show just how desperate the rebellion is, and what a tragic, and determined character Skarsgård is playing. While we don’t know if the mysterious, and now doomed Anto will appear in the next episode of Andor, things are certainly coming to a head, and audiences should be able to expect big things from the finale next week. With the losses we’ve already seen in the series to this point, it’s safe to say, not everyone will be making it out.

What did you think of Episode 11? Let us know in the comments below!