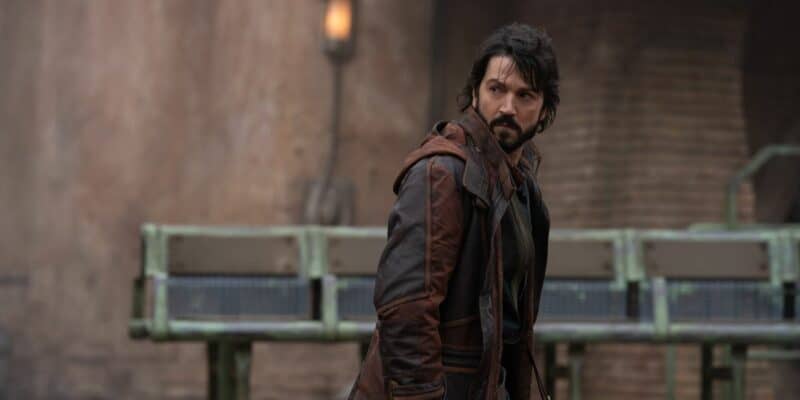 The first season of Star Wars: Andor finished this week with an action-packed eventful funeral on Ferrix. While it wrapped up some things, it left plenty of threads still open for the second season of the show — even though that won’t drop until 2024. Here’s what we think will be included in the next season.

With season two taking us right up the opening moments of Rogue One: A Star Wars Story (2016), we know that by that point Cassian (Diego Luna) has established his firm partnership with re-programmed Imperial KX-security droid, K-2S0 (voiced by Alan Tudyk in the film). We saw a glimpse of the KX droids in the first season, when Cassian was arrested on Niamos after they mistake him for a thief.

Cassian’s meeting with K-2S0 has previously been covered in a one-shot Marvel Comic from 2017, “Rogue One — Cassian & K-2S0 Special 1”, where our hero re-programmed the droid to help him on the planet of Wecacoe.

Whether that continues and is shown in live-action in season two of Andor is down to whether showrunner Tony Gilroy feels the need to either stick to the previous canon, or show the moment at all: after all, the show will jump between years as it attempts to span the four remaining until the Battle of Yavin after season one.

As we saw in the post-credits tease of the season finale, the Death Star’s construction is firmly underway. We know the battle station plays a pivotal role in the story of the Star Wars galaxy, and in Cassian’s own fate: it will eventually kill him during their fateful heist of the Death Star plans on Scarif, presumably the planet seen below it in orbit.

The Death Star will surely be a key part of the next season, as news of the construction and it’s volatile power reaches the Rebellion and efforts to put a stop to it are put into play. Whether the designer Galen Erso (Mads Mikkelsen) or Imperial Director Orson Krennic (Ben Mendelsohn) who leads on the project make an appearance is yet to be confirmed, although obviously both form key elements of this superweapon’s creation.

By the time of Rogue One, Cassian is officially a Captain in the Rebel Alliance military, well-versed and experienced in espionage for the uprising. After Cassian’s decision to place his fate in the hands of rebel organizer Luthen Rael (Stellan Skarsgård), we can assume from Luthen’s wry smile that he will take him into the fold properly, opting not to kill him to resolve his a loose end but tie him firmly back in with everyone else.

It will be interesting to see both the missions he gets involved in and how the Rebel Alliance forms itself more formally over the course of the intervening years: at some point, they will establish a true military base in the Massassi Temple on Yavin IV, which we see in Rogue One and Star Wars: Episode IV – A New Hope (1977).

ISB Supervisor Dedra Meero’s (Denise Gough) rise in season one was fascinating to watch. As she alone could perceive the organized Rebel effort to undermine the Galactic Empire’s control, she gained power within the organization, as well as a superfan in Syril Karn (Kyle Soller).

After an interrogation and a strained ambush outside her place of work, the pair were reunited during the confrontation on Ferrix. Syril saved Dedra from the rioting crowds by pushing a pistol into her back and forcing her into a side room. The last we saw of them, they were in close proximity, with Dedra feeling obligated to thank him for his efforts.

Whether this relationship blossoms into something more or remains platonic is up for debate. Up to now, Dedra has acted somewhat disgusted of Syril, his bald-faced ambition and obsession with her repulsive in a world which favors strategy and subterfuge above all else.

Dedra will undoubtedly want to still pursue her target, Axis, and perhaps now she will put Syril to work too — assuming he doesn’t let his obsession become murderous.

We leave Mon Mothma (Genevieve O’Reilly) in season one having sowed the seeds of how she could get out of her complex financial situation. With 400,000 credits unaccounted for in her books, and Imperial auditors closing in, she has set up her husband Perrin Fertha (Alastair Mackenzie) by deliberately leaking a lie about his gambling to account for the inaccuracies.

But she’s also committed to a deal with Davo Sculdun (Stephen Dillane), a shady financier, for whom she has had to introduce her daughter to his son as part of Chandrila’s custom of arranged teenage marriage. Bringing her family into the fight is another step for the Senator, who we know by the time of Rogue One has left the Senate and committed fully to representing the Rebel Alliance as their figurehead.

Related: Did You Spot This Special Tribute in ‘Andor’?

In Star Wars Rebels (2014), Mon Mothma is shown declaring this in the season three episode “Secret Cargo”, set approximately two years before the Battle of Yavin. In the Andor timeline, that means we could plausibly see members of the Ghost crew appear, or even hear Mon make this declaration.

It seems that after seeing Mon make significant moves towards embracing the start of the conflict in season one, season two will see her move out of the shadows and into the open in her fight against the Galactic Empire.

What do you hope happens in season two of Andor? Tell us in the comments below.
Andor (2022) is the new Star Wars show, currently streaming on Disney+. Led by showrunner Tony Gilroy, it stars Diego Luna as Cassian Andor, Genevieve O’Reilly as Mon Mothma, Stellan Skarsgård as Luthen Rael, Fiona Shaw as Maarva Andor, Denise Gough as Dedra Meero, Kyle Soller as Syril Karn and Adria Arjona as Bix Calleen. Set before the events of Rogue One, in the years prior to Princess Leia’s fateful capture by Darth Vader, the Andor series follows the formation of the Rebel Alliance in the ever-expanding Star Wars universe.