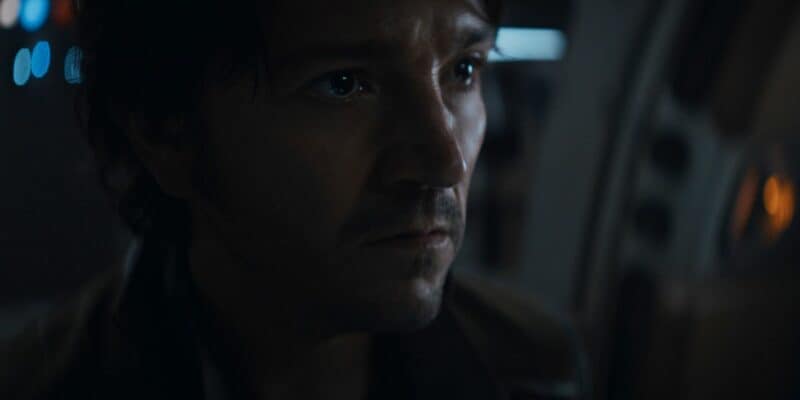 Andor (2022) follows a the story of a future Rebel Alliance Captain, Cassian Andor (Diego Luna), as he makes a journey from thief to war hero in 2016’s Rogue One: A Star Wars Story.

Related: Did You Spot This Special Tribute in ‘Andor’?

It isn’t the most immediately engaging prospect, following a character from a five-year-old Star Wars movie to a foregone conclusion: he, along with the rest of his squadron, are eliminated by the Death Star at that film’s gripping climax. But against all expectations, what showrunner Tony Gilroy and a team of accomplished, dedicated talent have achieved is nothing short of some of the best Star Wars we’ve ever had.

The 12-episode season started relatively slowly, easing you into the industrial world of Ferrix and a cast of hardscrabble citizens trying to carve a life outside of the Empire’s line of sight. Our way in is Cassian, a thief who gets far more than he bargained for when a transaction with a mysterious buyer, Luthen Rael (Stellan Skarsgård) turns out to be the start of something much bigger.

Unwittingly, he has found himself an essential cog in the founding moments of what will become the Rebel Alliance. It’s a journey that will take him and the audience from Ferrix to a daring heist in a rural, harsh landscape; to a dystopian, water-locked prison; and back to where it all began, for a thrilling finale.

More than anything, you get the sense that Andor has a point of view. This is a galaxy without the mythic heroes of the Jedi, and no Force (at least not visible) in sight. Instead, it is a story of people on both sides of a conflict, doing what they need to do to make their way in a changing time. And time is something they can afford. The 12 episodes let Andor truly let characters and moments breathe.

If the likes of Kenobi (2022) or The Book Of Boba Fett (2022) turn on fan recognition, frequent cameos dosing serotonin playing out against the Volume’s limitless backdrop, Andor takes a different tack. It goes physical, scouting lush real-world settings for it’s harsh realities to exist in. And while there are fun references to be had (see the Arrestor-cruiser from the penultimate episode), it is far more focused on prioritising it’s tale of heroes, villains, and the gray space in-between.

And those who do believe can be just as dangerous, none more so than Luthen, who — along with fellow rebels Kleya (Elizabeth Dulau), Vel (Faye Marsay), Cinta (Varada Sethu) and more, demonstrate just what it takes to win a guerilla war. There are calculated losses to be made; decisions which leave blood on the hands but are necessary to make victory possible. Within that, there’s also nuance: an unwieldy, difficult sort of love story plays out between Vel and Cinta, some queer representation in amongst the fight.

As for the fight itself? There are some who argue that Andor might not have enough, not enough flashing saber battles or space fights to keep you entertained. I’d argue that instead, it deploys those far more effectively by giving them stakes, and they’ve never looked better on the small screen.

There’s physical heft to conflict, and real danger to a cast of three-dimensional characters who you can’t be sure will make it see their eventual victory. One moment towards the end of the series, where Luthen deploys subterfuge to evade the Empire onboard his ship the Fondor, is stunning, with each evasion a new twist in a tense escape sequence.

The Galactic Empire itself is a chilling presence. Casual, fascistic bureaucracy is peppered throughout the show, evils both large and small seen inflicted on a galaxy feeling the weight of the Imperial heel. The Imperial Security Bureau is a pit of toxic ambition, with ISB agents sliding knives in one another’s backs to create steps up the career ladder.

Out of this nest of vipers comes one of Andor‘s most fascinating creations: ISB Supervisor Dedra Meero (Denise Gough). An underdog, and true believer, somehow Gough’s compelling performance makes you root for her even as she actively works against our Rebel heroes. She’s the only one with the clarity of vision to see the uprising happening, to connect the dots: the rest are too distracted by careerism and arrogance to see how the tide is turning against them.

There’s also Kyle Soller’s Syril Karn, a small-time deputy inspector who develops a fascination with Cassian and the investigation after some bad moves early on cost him his career. It’s a desperate, lizard-like from Soller, creepy and volatile in his moments of silence and obsession.

Similarly desperate is Genevieve O’Reilly’s Mon Mothma, through whom we get to see a totally different side to the conflict. As the still-serving Senator of Chandrilla, we know she will, in matter of a few short years, become the open leader of the Rebel Alliance (O’Reilly is reprising her role from Rogue One here). At this point in galactic history, she is effectively alone; working in secret with Luthen, through the guise of shopping at his antiques store, she has to navigate being directly within the Emperor’s gaze, playing the front of opposition within a puppet Senate while stealing moments to transfer funds and move allies to make the fight possible.

Her arc in the show is one of being thrust into action, and trying to play the correct deadly game to stay in it as long as she can. It’s a wonderfully restrained performance from O’Reilly, who has to maintain composure but also show the strain of how this impacts her family and herself as the series plays out.

It’s also buoyed by some memorable supporting turns too: who could forget Andy Serkis’s Kino Loy, a natural leader given the mantle of leading men on a life or death escape? Fiona Shaw also puts in an affecting, spirited performance as Maarva Andor, Cassian’s adopted mother with a passion for the cause.

“Never more than 12.” “I burn my life to make a sunrise that I know I’ll never see.” “There is a wound that won’t heal at the centre of the galaxy. The Empire is a disease that thrives in darkness, and it is never more alive than when we are sleeping.” In the writing alone, Andor has provided us with so many memorable moments, quotes that ring true not just to the setting of the show but also throughout the Star Wars galaxy and beyond.

There’s a lot of truth and relatability here, with something to say about how easy it is to fold under fascism veiled as order, and what it means to stand up for what you believe is right. For those who say Star Wars has never been political: George Lucas would disagree. That’s not to say that there isn’t space in the galaxy for stories of derring do and adventure. The Mandalorian (2019) handles those just fine, and the beauty of the world Lucas created is that it can be turned to so many things.

For a story like this, so switched on, so pointed and ornate in it’s storytelling, willing to take risks and the time it needs to tell it, it’s hard to think of another example. Andor takes place in a galaxy far, far away, but it’s never hit closer to home. And you can’t do much better than that.

What did you think of season one of Andor? Tell us in the comments below.
Andor (2022) is currently streaming on Disney+. Led by showrunner Tony Gilroy, it stars Diego Luna as Cassian Andor, Genevieve O’Reilly as Mon Mothma, Stellan Skarsgård as Luthen Rael, Fiona Shaw as Maarva Andor, Denise Gough as Dedra Meero, Kyle Soller as Syril Karn and Adria Arjona as Bix Calleen. Set before the events of Rogue One, in the years prior to Princess Leia’s fateful capture by Darth Vader, it follows the formation of the Rebel Alliance in the ever-expanding Star Wars universe.