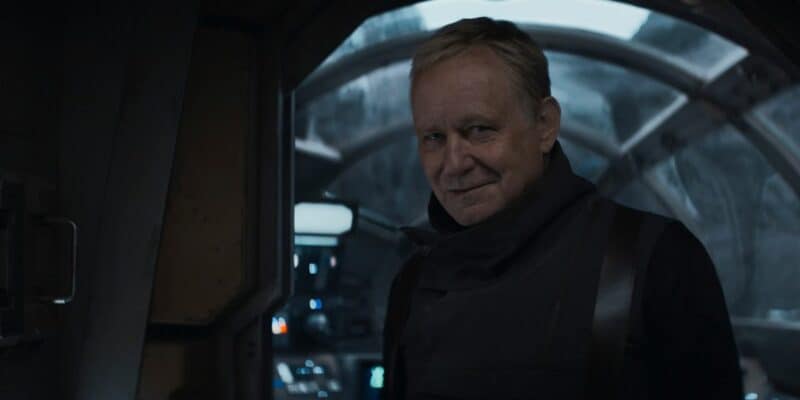 Star Wars: Andor (2022) ended the first season with an explosion confrontation and eruption of rebellion on Ferrix. But what about that post-credits sting? After a season of seeing the uprising and discontent slowly build, the show wove our characters together to a violent clash at the funeral of Maarva Andor (Fiona Shaw), who delivered a rousing message of unity to the people in her congregation.

Denise Gough’s vicious ISB Supervisor, Dedra Meero, was thrown into close proximity with her biggest fan, Syril Karn (Kyle Soller), who may or may not be obsessed with her and her targets. And Mon Mothma (Genevieve O’Reilly) set in motion a solution to her own monetary woes, covering it with a salacious lie about her husband gambling but still making the heartbreaking decision to offer her daughter to a shady financier in return for his help shuffling funds.

As for Cassian himself (Diego Luna), he closed out his journey from thief to full blown rebel by offering rebel organizer Luthen Rael (Stellan Skarsgard)  the opportunity to bring him into the Rebellion’s ranks properly.

But none of these are the most tantalising part of the finale. No, that comes courtesy of the post-credits sting. A short but effective scene, it starts up close with droids in space, applying the parts we’d previously seen Cassian and his fellow Narkina 5 prisoners help assemble within that prison facility.

But as the camera pans out, we see the bigger picture. Being assembled is part of the Death Star’s central ‘eye’, the weapon from which it will project the ability to destroy entire planets and threaten the entire Star Wars galaxy. Cassian has unwittingly been forced to help build the very thing which will eventually destroy him.

We know Cassian’s journey will eventually lead him into conflict against the Galactic Empire’s most devastating weapon, thanks to Rogue One: A Star Wars Story (2016). And with season two set to take us right up until that film begins, it makes sense that the superweapon would begin to feature more heavily. The question is, will Cassian realise just how much he himself has contributed to the creation of the killer space station?

What did you think to the post-credits scene in Andor? Tell us in the comments below.

Star Wars: Andor (2022) is currently streaming on Disney+. Led by showrunner Tony Gilroy, it stars Diego Luna as Cassian Andor, Genevieve O’Reilly as Mon Mothma, Stellan Skarsgård as Luthen Rael, Fiona Shaw as Maarva Andor, Denise Gough as Dedra Meero, Adria Arjona as Bix Calleen and Kyle Soller as Syril Karn. Set before the events of Rogue One, in the years prior to Princess Leia’s fateful capture by Darth Vader, before Obi Wan Kenobi’s fateful encounter on the Death Star, it follows the formation of the Rebel Alliance in the ever-expanding Star Wars universe.