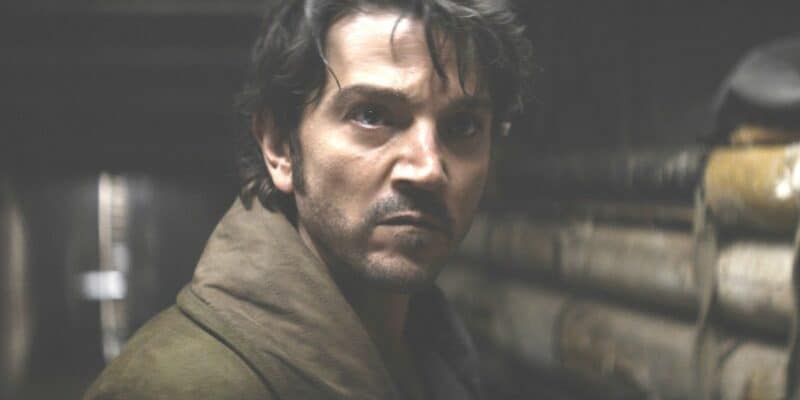 After a season which has taken Cassian Andor (Diego Luna) from a scrapyard to a heist, an Imperial prison and more, we are back where we started: Ferrix. Here, the majority of our key players will converge, Maarva Andor’s (Fiona Shaw) funeral drawing together everyone from the ISB to the Rebels in an effort to capture or kill our titular hero. And what a season finale: tense, inspiring, and a tease for what is to come in season two all at once.

The episode opens with Wilmon Paak (Muhannad Baier) seen soldering together a device. He has a holo portrait of his late father, Salman, who ran the Ferrix parts shop and was killed by the Empire earlier in the season, open as he does.

A LAMBDA-class shuttle arriving on a stormy Ferrix. It’s ISB Supervisor Dedra Meero (Denise Gough), come to personally oversee the operation to capture Andor and in turn, find her target known as Axis (we know them as Luthen Rael, played by Stellan Skarsgård).

In Ferrix town, Xanwan (Zubin Varla) tells Brasso (Joplin Sibtain) that he has spoken to Cassian and told him of Maarva’s death. Brasso hopes he reminded him that coming here would be a very bad idea. Xanwan says their conversation was short, and he had no idea where Cassian was calling from.

Dedra and Corv (Nouf Ousellam) have donned civilian clothes to walk the streets. They are being followed by Cinta Kaz (Varada Sethu), who has had an eye on Corv’s spying for a while, her Imperial opposition in observing the Andor family home and allies.

On Coruscant, Mon Mothma (Genevieve O’Reilly) waits for husband Perrin Fertha (Alastair Mackenzie) to join her in their speeder. She asks for privacy from driver and Imperial spy Kloris (Lee Ross), knowing all too well that he is actually listening.

She chastizes Perrin for his gambling, something he vehemently denies, insisting someone must be setting him up. “Go to Canto Bight, do what you need to do there — but not here,” Mon says.

On Ferrix, Vel Sartha (Faye Marsay) is reunited with Cinta. Vel wants more from their reunion, but Cinta is all business: her eyes are fixed on the Andor home, noting how many Imperials are on world, waiting for Cassian to return.

Little do they know, he is already here. He steals his way through the streets, making it to his father Clem’s (Gary Beadle) own funerary brick. As he touches the stone, he has a memory of his father: “People don’t look down like they should. Eyes open, possibilities everywhere,” Clem once told him.

Cassian then heads to see Pegla (Kieran O’Brien) in his scrapyard, who tells him that Bix (Adria Arjona) has been captured and is being held in the Imperial hotel base.

Luthen has arrived on Ferrix, and is seen watching the town. It cuts to Cassian, hidden and listening to Karis Nemik’s (Alex Lawther) rebel manifesto.

“Authority is brittle; opposition is the mask of fear,” Nemik says.

In the Imperial base, Dedra is briefed on the funeral plans. They’ve given them part of Rix Road, and a maximum of 40 people. They suggest assigning snipers, but Dedra says no: she wants them contained, not dead. Capture is the priority.

At ISB HQ, Kloris is feeding back the information about Mon Mothma and Perrin’s gambling woes to Lt. Supervisor Blevin (Ben Bailey Smith). He confirms they have been keeping an eye on her and that these issues might go some way to explaining some odd financial moves. They are then summoned into a larger briefing by Supervisor Lagret (Michael Jenn), alongside Supervisor Lonni Jung (Robert Emms).

It’s an update on the Anto Kreegyr raid on Spellhaus. The rebels have been massacred. Dedra dials in, angry at the lack of prisoners, but Major Partagaz (Anton Lesser) says the operation wasn’t about information — it was “about wiping the taste of Aldhani from the Emperor’s mouth.”

On Ferrix, Corv sees that B2EMO is leaving the Andor residence without his master. In the tunnels beneath the town, Cassian reunites with Brasso, who passes on a message: Maarva wanted him to know none of this is his fault, and that he was just the first spark of a fire that was already burning.

“Tell him he knows everything he needs to know, and feels everything needs to feel,” Brasso passes along. “And when the day comes and those two pull together, he will be an unstoppable force for good.”

As the crowd begins to gather for Maarva’s funeral, Luthen meets with Vel. He reassures her that the heavy Imperial presence is a good thing. It means they will find him for them, and all they have to do is make sure Cassian is dead before they can ask any questions.

The time grappler starts resonating and the people begin to gather in bulk, with music and the funeral procession starting. They’ve started early, wrongfooting the Empire. From his hiding place, Cassian spots Luthen.

Related: Did You Spot This Special Tribute In ‘Andor’?

Nurdi (Raymond Anum) finds Corv and tells him he knows where Cassian is, and he should pretend to arrest him to get the information. On the funeral route, Syril and Luthen both spot Dedra making her way through the crowd, flanked by Death Troopers, acting on the information Nurdi has provided to arrest her target.

The processions starts down Rix Road, towards a line of Imperial troops. As people gather at the meeting point, B2EMO begins to play a large holo of Maarva herself. She begins by reminiscing about her time on Ferrix, the sense of community and safety they find in one another. But as the speech continues, it becomes clear this is no self-eulogy; it is a call to arms.

“There is a wound that won’t heal at the centre of the galaxy,” Maarva says. “The Empire is a disease that thrives in darkness, and it is never more alive than when we are sleeping. Fight the Empire!”

Cheers break out as Imperial Captain Vanis Tigo (Wilf Scolding) pushes through and tips over B2EMO in an effort to stop the broadcast. Brasso takes a swing with Maarva’s funerary brick and a riot breaks out.

In the chaos, Cassian has broken into the Imperial hotel and reunited with Bix. He convinces her to join him in escaping.

In the crowd, Wilmon reveals the device he was building at the episode’s start, activating it and throwing it at the Imperials. It’s an explosive, and the force of the blast triggers others in the Imperial stash to detonate too. As smoke fills the street, Cpt. Tigo commands the stormtroopers to fire at will on the crowd. Among the dead is Xanwan.

Elsewhere, Corv confronts Cinta, who promptly stabs him. At the Imperial base, Cassian and Bix are near the exit when they spot a dead Nurdi. As a trooper tries to kill the pair, Cassian takes him out with a leaping shot from his blaster.

In the Rix Road battle, Dedra is attempting to flee, but ends up floored, being grabbed by rioters. Syril emerges with his blaster, pushing it into her side and driving her into a nearby building. With uncomfortably close proximity, Dedra recognises him, even as he introduces himself. “I should say thank you,” she shudders.

Luthen is watching the carnage unfold from afar. In the Andor home, Vel and Cinta are emptying everything, clearing out all evidence and anything the Imperials could use against them.

At Pegla’s shipyard, Jezzi (Pamela Nomvete), Brasso, B2EMO and Wilmon are making an escape, trying to prep the ship. Cassian and Bix appear, and Cassian places her on the ship — insisting they have to go, and advising them how best to escape, while confirming that he will be staying behind. Bix says Cassian will find them, as the ship departs.

As Luthen prepares to escape onboard the Fondor, Cassian reveals that he has also stashed onto the ship. He tells Luthen he knows he came to kill him, and is offering him the chance, leaving his blaster for him to use. But then he offers him a choice — kill him, or take him with him. Luthen scoffs, and the screen cuts to black.

But as the credits roll, it isn’t the final scene: the last shot, a post-credits tease, shows construction on a massive space station, the parts created on Narkina 5 forming an element of a huge array. As the camera pans out to reveal it orbiting a vast blue planet, we recognise it. It is the Death Star, undergoing final construction above Scarif, a lethal threat to the entire Star Wars galaxy.

What did you think of the finale of season one of Andor? Tell us in the comments below.
Andor (2022) is currently streaming on Disney+. Led by showrunner Tony Gilroy, it stars Diego Luna as Cassian Andor, Genevieve O’Reilly as Mon Mothma, Stellan Skarsgård as Luthen Rael, Fiona Shaw as Maarva Andor, Denise Gough as Dedra Meero, Kyle Soller as Syril Karn and Adria Arjona as Bix Calleen. Set before the events of Rogue One, in the years prior to Princess Leia’s fateful capture by Darth Vader, it follows the formation of the Rebel Alliance in the ever-expanding Star Wars universe.