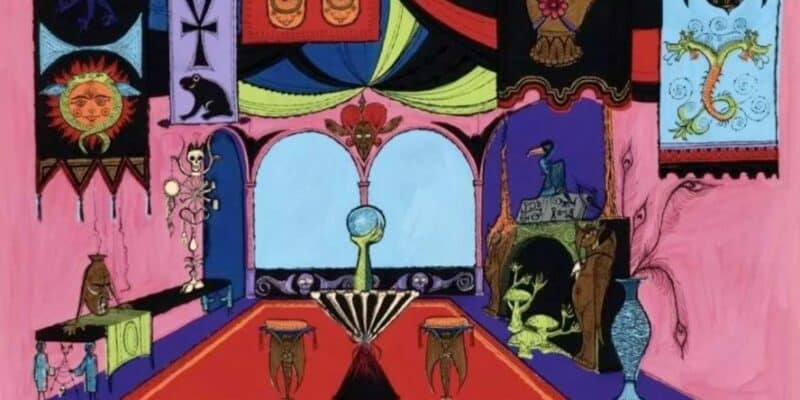 The Haunted Mansion was almost the Museum of the Weird- a museum of paranormal oddities in a fantastical setting. It was an idea by Imagineer Rolly Crump. After showing his sketches to Walt, the concept of an actual museum came to life.

This vision was an unbuilt walkthrough attraction as a companion piece for Disneyland’s Haunted Mansion in New Orleans Square.

There were two films that inspired Rolly to make creations that were more surreal, like in those movies- La Belle et la Bete (1946) and Juliet of the Spirits (1965).

During the development of the Haunted Mansion and the varying discussions over what creative direction the project should go into, Rolly wanted to go beyond the typical haunted house approach. His work for the Mansion was decidedly more surrealistic and occultic compared to the rest of the work being produced.

Such oddities would include Romani and Voodoo artifacts, an appearing and disappearing organist, a melting candle man, a chair that stood up and talked to guests, and many other trinkets and items.

Sadly, the attraction would never be fully developed.

“The story is about two teenagers Maxwell and Melody Keep. With the help of their strange Uncle Roland, they have to brave the dangers of the Museum of the Weird. It is a repository for the most dangerous, mythical artifacts on earth. The kids have seven days to find one artifact in particular. If they don’t find it in time, there will be dire consequences.”

Oddities Did Actually Make it into Disney Parks

Several items did make it into the finished Haunted Mansion at Disneyland, as well as sprinkled throughout the park. Items and mentions of the Museum of the Weird also made its way to different Disney parks around the world.

You can see the Talking Chair, which became the Donald armchair, near the Endless Hallway.

The Seance room is used as a big scene in the Haunted Mansion attraction. However, it takes on a very different design.

Romani’s Wagon was eventually reworked and for what is now Madame Leota’s Cart that sits outside of the Haunted Mansion.

The Man-eating plants can be seen inside Mystic Manor in Hong Kong Disneyland.

The Grandfather Coffin Clock can be seen at Disneyland’s Haunted Mansion inside the long hallway.

During one of the planning meetings, all the Imagineers had their sketches and models out for Walt to see. Rolly’s table caught his eye. The next morning, he found Walt sitting at his desk wearing the same clothes from the previous day. Walt told Rolly that he had been up all night thinking about all the weird stuff he had seen and felt that it needed its own showcase.

That is how the Museum of the Weird came to life.

Sadly, Walt’s death led to the entire project being scrapped.

Inside the Magic got a chance to interview Rolly Crump himself about the Museum of the Weird!

There were still many other concepts and ideas that didn’t make it into any of the parks.

Throughout all the parks, there are hidden Easter-eggs that give homage to this masterpiece.

On Main Street U.S.A, in Disneyland, there is a reference to the Museum of the Weird. The theme is that of a fortune-teller’s business. There is a window display reading “Fargo’s Palm Parlor; Predictions that will haunt you; Bazaar, whimsical, and Weird. Designs to die for. Roland F. Crump assistant to the Palm Reader.” On the window, concept art made by Crump appears- including the Coffin Clock, a tower from it’s a small world in Fantasyland, and Maui from the Enchanted Tiki Room.

Inside Mystic Manor, in Hong Kong Disneyland, it features many strange and unusual artifacts from around the world that come to life.

The original Ghost Relations Department placed outside of the Haunted Mansion at Disneyland mentioned the mansion having a “Museum of the Supernatural” located within it.

Big Thunder Mountain Railroad at Walt Disney World has an easter-egg hidden in its queue relating to the Museum of the Weird. S.E.A Leader Jason Chandler mentions consulting with the museum about a supernatural occurrence within Big Thunder Mountain.

He also mentions the museum being run by one Madame Zarkov.

S.E.A- The Society of Explorers and Adventurers

The Society of Explorers and Adventurers, also known as S.E.A, is a secret society in the Disney Parks which connects to both the Haunted Mansion and Mystic Manor. It also connects several other Disney attractions and properties.

S.E.A was first integrated for the walkthrough attraction, Fortress Explorations at Tokyo DisneySea. It was inspired by the Adventurers Club and Pleasure Island in Downtown Disney.

So much of The Society of Explorers and Adventurers methods and background are shrouded in secrecy. The society has always been invite-only, and only welcomes the most innovative, bold, and clever into its circle.

Over the decades the Society of Explorers and Adventurers has amassed a very large array of different members from around the world.

Connections All Around Disney

Madame Zarkov was contacted by S.E.A President Jason Chandler to assist fellow member, Mr. Bullion. He was encountering paranormal disasters in his mining company- Big Thunder Mountain. Zarkov advised Chandler to urge Bullion to abandon everything due to a vengeful spirit.

Zarkov was a character created for Walt Disney World. She would later be intertwined into the Big Thunder Mountain Railroad at the Magic Kingdom with additional allusions to the Museum of the Weird and S.E.A.

The Society of Explorers and Adventurers, and their members, have ties to every Disney Park, and even especially to the Museum of the Weird.

At the Magic Kingdom in Walt Disney World, inside the Skippers Canteen, there is a small library featuring several books. One of the books is titled, “Myths of the Supernatural” and the authors name is Gracey.

Melanie Ravenswood (the bride in Phantom Manor) had a deceased suitor named Captain Rowan D. Falls. His ancestor was S.E.A member Dr. Albert Falls. The Thunder Mesa Daily Messenger, a local newspaper, also mentioned several “explorers and adventurers” having explored Ravenswood Manor, only to be terrorized by the spirits within.

Lord Henry Mystic opened part of his manor to showcase his personal collection antiquities to the public. His home was filled with portraits of S.E.A members and homages to the society itself.

If you look close enough, all around every Disney Park across the globe, there is some connection to the Society of Explorers and Adventurers; as well as to the Museum of the Weird.

Were Disney Imagineers just that creative with intertwining backstories that much? Or did these people actually exist?

If you could see one thing from the Museum of Weird come to life, what would it be? Let us know in the comments!

Comments Off on The Haunted Mansion, Its Museum, and the Secret Society