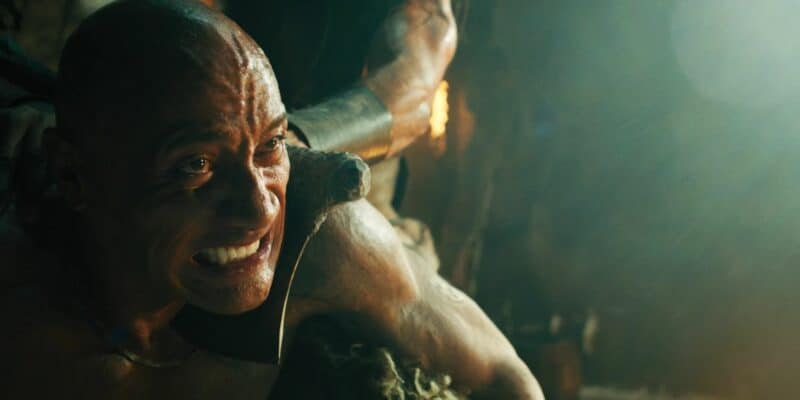 What happened in the mid-credits scene of Dwayne Johnson’s DC Extended Universe debut?

If you made the sensible choice to stick around as the credits rolled in Black Adam — and who isn’t making that choice these days? — then you might have seen the most exciting scene in the film.

Having made his peace with the Justice Society, Black Adam (Dwayne Johnson) is in the Kahndaq throne room, wearing his new moniker and role as the country’s protector with pride and rising to meet the drone sent by Amanda Waller (Viola Davis) to deliver a hologram video call.

(Side note: hasn’t this woman heard of Facetime, Zoom, or Google Hangouts? Sending a large drone to deliver a holographic version of yourself seems excessive — although if you’re ever picked up a DC comic, you’ll know Amanda isn’t known for her subtlety.)

In typical bullish style, The Wall has called to deliver one thing: a warning. If Adam won’t stay in her underwater prison, Kahndaq can be his jail instead. Take one step outside its borders, and she will call in her big guns — bigger than Dr Fate, Hawkman or the rest of the Justice Society combined. Adam’s ego swells to match The Rock’s biceps, and he replies that there’s no one on this Earth who could stop him if he wanted to.

But she’s “not talking about someone from this planet”. As comebacks go, it’s a pretty good one. He challenges her to “call them all”. And so she does. A flying figure lands in a cloud of dust. As the smoke roils, you can just about make out a familiar cape as an iconic theme stirs in the movie’s score. And out of the mire steps one of the most iconic heroes of them all. Justice Society this is not. Justice League… that’s another matter. Superman (Henry Cavill) steps forward to meet Adam’s stature, the red and blue shining, hair curl meticulously in place, and ‘S’ emblazoned across his stalwart chest.

“We should have a talk.” Cut to black. The implications are clear, and The Rock himself hasn’t been shy in talking about them: Adam is set to have a showdown, one way or another, with The Last Son of Krypton. Much has been made of Adam’s power and place in the “hierarchy of power in the DC Universe“, as a character with a move set not entirely dissimilar to Superman’s own. Both can fly; fire some form of elemental power; have super strength and invulnerability. Things seem to line up nicely for the pair to have a confrontation, especially after Black Adam’s own movie essentially laid out the table for why the world should sit up and pay attention to the fact he is on the superhero scene.

The prospect is a delicious one, even if you take only the fact it means Henry Cavill could return to the big screen once more as Clark Kent. He hasn’t been seen since last year’s Zach Snyder’s Justice League (2021), not counting the headless cameo in Shazam! (2019) and if DC and Warner Bros are sticking to their official chronology, he actually hasn’t made an appearance since the 2017, none Zack Snyder version of the JL team-up. Cavill is the perfect casting for the earnest hero, and the fact his reappearance here can cause such a stir in a short amount of screen time is testament to the support he has from the fanbase — and could be a big box office draw too.

With Black Adam being positioned by The Rock himself as being a new starting point for phase one of DC and Warner Bros Discovery’s movie output going forward, things look promising for the Man Of Steel to make a true return to the big screen worthy of his status (no offense, DC League Of Super Pets).

Are you excited to see Superman back on the big screen? Do you think Black Adam could take him, Wonder Woman and the Dark Knight combined? Let us know in the comments below.

Synopsis: Nearly 5,000 years after he was bestowed with the almighty powers of the Egyptian gods-and imprisoned just as quickly-Black Adam is freed from his earthly tomb, ready to unleash his unique form of justice on the modern world.