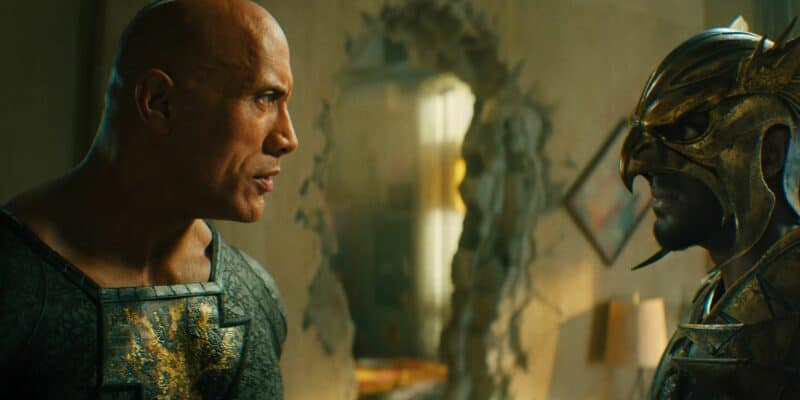 Synopsis: Nearly 5,000 years after he was bestowed with the almighty powers of the Egyptian gods and imprisoned just as quickly-Black Adam is freed from his earthly tomb, ready to unleash his unique form of justice on the modern world.

Black Adam might have waited 3000 years to return, but it feels as though the movie adaptation of the DC Comics anti-hero has been just as long in gestation.

It was way back in 2007 that Dwayne ‘The Rock’ Johnson was first linked to the role. Now, 15 years later, he finally arrives on the big screen. But has he been worth the wait?

The movie opens with a burst of exposition, filling you in on the ancient civilization of Kahndaq. Oppressed by a selfish, power-obsessed king, Anh-Kot, he drives the people to find Eternium, a substance needed for him to forge a crown that would grant him demonic strength. A lone boy, Teth Adam, decides to rise against him, and his courage grants him the power of Shazam (yes, the one and same, with a small cameo from Djimon Hounsou’s wizard to boot).

After he uses his abilities to defeat the evil king, we jump forward to the present day. Kahndaq and its people have unfortunately fared no better: the country is now occupied by the Intergang, a mercenary organization that appears to be as fixated on acquiring the crown as the ancient king was. Archaeologist Adrianna Tomaz (Sarah Shahi) and her merry band stand against them, and in a confrontation at the ancient burial site, awaken Adam (Dwayne Johnson) from his slumber to return once again as the champion of their people.

His methods are violently efficient, and the Justice Society of America decides to head him off before he can cause any more carnage. Among their roster, comprised entirely of newcomers to the DCU’s big-screen ventures, are Hawkman (Aldis Hodge), Doctor Fate (Pierce Brosnan), Atom Smasher (Noah Centineo), and Cyclone (Quintessa Swindell).

For DC to truly succeed at the superhero cineplex, it needs to define itself as something different from Marvel Studios’ offering. The Suicide Squad (2021) offered a violent, anarchic glimpse at what that could look like, and the success of Zach Snyder’s Justice League (2021) showed that self-serious superhero fare was as in demand as Marvel’s signature super-snark. Black Adam firmly operates in Zach Snyder mode, with desaturated, high-detail shots of superhero brawls and the subsequent collateral damage. Director Jaume-Collet Sera makes a few concessions to humor: there are swerves into physical comedy and puns, delivered most successfully by Brosnan’s Dr Fate, but these feel out of place.

It’s trying to be a relatively earnest attempt at a story about liberation, absolution, and the moral grey area it often requires people to operate in to achieve both. But it wants to achieve that while letting The Rock carve his way through swathes of identikit mercenaries — and it achieves the latter with far more confidence. He rips them asunder in a way that may seem shocking to those used to the non-lethal superhero approach. And Johnson’s glower and neck muscles are intimidating enough alone to scare any rent-a-goon. But this is still confidently family-friendly, if not quite the DC League Of Super Pets, once you allow for a few swears and far fewer enemies walking away from the fight.

Johnson definitely has the physicality for the part, as if that was ever in doubt. When you see the bullets, rockets, and more bounce off Adam’s physique, you believe they would slide off the Rock’s too. From his own promotion of the movie and self-confessed fandom for the character, he clearly has big plans for how he could shake up the DC Universe. Certainly, his confrontations with the Justice Society are entertaining.

There are plenty of slow-motion, desaturated shots of the super powerful blasting one another into the next franchise, even if the general setting of Kahndaq itself — where the film primarily spends its time — is relatively uninspiring. They do have fun with one fight, which sees Adam smashing his way through a bedroom festooned with posters of the Justice League, action figures of Batman, Wonder Woman, and Superman being shaken to pieces in the furore. It’s a fun moment in a movie where it’s not unusual to spot a DC comic thrown on the floor. Johnson is clearly wanting to establish Adam’s place as a giant of the genre, the top of “the hierarchy of power” in the DC Universe and in Warner Bros Discovery’s vision for these characters on the big screen.

In this, however, he comes across as the soberest hero on screen, a relatively blank canvas compared to those he is facing on the Justice Society roster. Aldis Hodge brings a weary, veteran hero quality to his Hawkman, and Brosnan has fun amping up the inherent camp of his clairvoyant sorcerer Dr Fate. Noah Centineo is operating in a mode somewhere close to Deadpool, but he and Quintessa Swindell’s two younger characters make less of an impact amongst the bigger personalities on screen (regardless of the fact Atom Smasher can make himself six stories high). All these characters benefit from feeling liberated themselves, in that they are introduced without being laden with backstory or their own titles. Instead, you can soak up the fun of seeing them grow giant, duplicate themselves, spin hurricanes or conjure up spinning maces, and roll with the smashes and crashes.

Entering Black Adam in that spirit, as a smash-and-crash superhero romp, is perhaps the best way to see it. It ultimately struggles to make anything truly nuanced or meaningful out of the plotline about the spirit of the people, and some narrative hijinks — which seem aimed at hoodwinking the audience into plot twists to pay off further into the movie — caused a little head-scratching in the moments before their resolution. But for a film in which The Rock can fire lightning from his fingertips, move at superspeed, fly, and catch rockets mid-flight, it delivers just enough bombastic action to make for an undemanding trip to the multiplex. And yes, you should stick around for the mid-credits.

Black Adam might not be smashing through anything you haven’t seen before at the cinema, but as a bombastic superhero romp, Johnson and a game cast of superheroes are a pleasantly undemanding trip to the movies. 2.5/5

If you’ve seen Black Adam, where do you rank it in the hierarchy of the DC Extended Universe? Do you think fans will see a confrontation with Billy Batson (Zachary Levi’s Shazam) in future DC films? Let us know in the comments below.