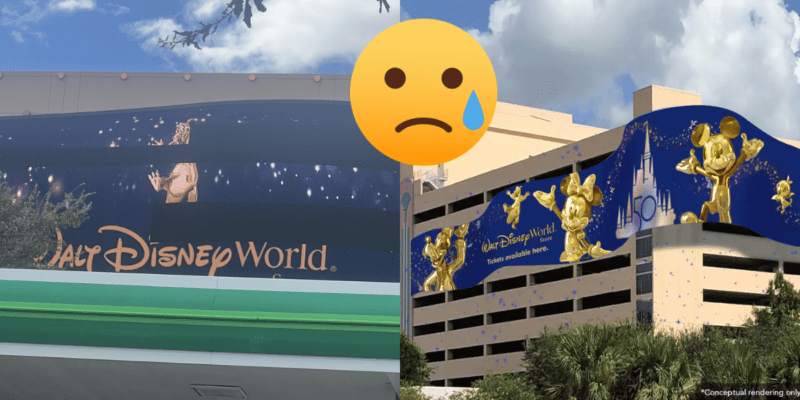 In May, Disney Parks Blog announced that the first-ever Walt Disney World store would open on International Drive in Orlando, Florida. The store opened on May 31 with a massive digital billboard advertising the Resort’s 50th Anniversary.

Outside of the Orlando International Airport (MCO), this is the only Walt Disney World Resort merchandise location off Disney property. Those very airport store displays inspired the massive, gleaming billboard on top of the Hollywood Plaza parking garage on I-drive.

“We took a lot of knowledge from setting up the 50th art installations in our parks and the Orlando International Airport and wanted to spread a little of that magic out into the world,” Will Gay, design director with Disney’s Yellow Shoes Creative Group, told Disney Parks Blog. “It all started with a little idea and a question – could we do this? Could we turn this into a dynamic art display bigger than anything we’ve ever done before?”

Related: Guests Topple One Another For New Disney Park Merchandise

Unfortunately, the glimmering billboard isn’t holding up. @GregInORL shared a photo of the billboard this week on Twitter:

Off with his head

Off with his head pic.twitter.com/VrLqjFrlar

According to Disney Communications and Public Affairs Manager Kathleen Prihoda, the billboard is meant to be an “impressive ribbon-like Disney art display that enwraps the outside of Hollywood Plaza garage.”

Over time, the interactive display will change, advertising new products and experiences at Walt Disney World Resort. The 50th Anniversary Celebration is slotted to end early next year, so new art is expected soon!

Have you noticed damage to the Walt Disney World store billboard?