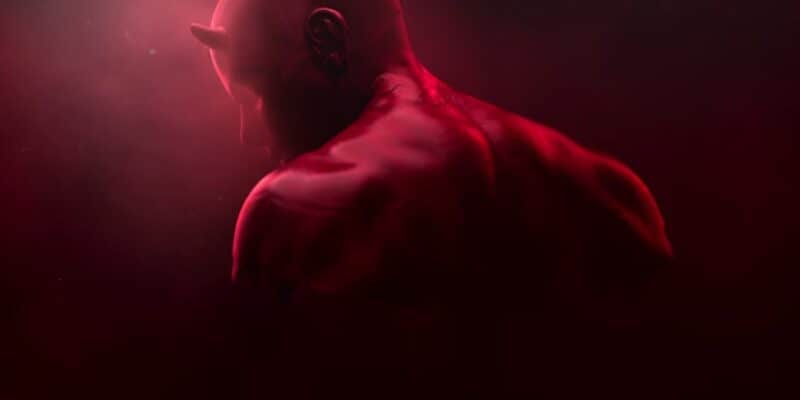 Matt Murdock, Daredevil, The Man Without Fear, The Devil of Hell’s Kitchen — he’s known by many titles in the Marvel Universe, but soon the horned superhero will go by a new title.

Created by Stan Lee, Bill Everett, and Jack Kirby, “Daredevil #1” (1964) marked the first Marvel Comics appearance of The Man Without Fear. With almost sixty years behind him, Daredevil has become one of the most famous characters in the Marvel lexicon, and his appearances in live-action (2003’s Daredevil notwithstanding) have only bolstered his popularity.

Marvel’s Daredevil on Netflix ran for three critically-acclaimed seasons. With Charlie Cox in the title role, the series found Matt Murdock balancing his life as a lawyer and crime-fighting superhero, and while fans loved the dark, gritty drama, its third season would mark its last — along with the Jessica Jones, Luke Cage, Iron Fist, The Punisher, and Defenders shows; a few years later, the ownership of the characters would revert back to The Walt Disney Company and Marvel Studios, leading New York’s Daredevil into Kevin Feige’s Marvel Cinematic Universe.

But, aside from Daredevil’s tumultuous time in live-action with the Netflix series, the character continues his life in the pages of comic books. The current run of “Daredevil” sees Matt Murdock’s Daredevil join forces with the Universe’s other Daredevil, Elektra Natchios. The latter took up the mantle of The Woman Without Fear after Murdock landed himself in prison. Now, the two will get closer than ever before in events that will give them both new titles.

The official description of “Daredevil #4” tells us:

For months, Elektra Natchios has been developing a plan to save the world from the violent and ruthless HAND by rebuilding its opposite equal – the FIST. And with the world at large believing he’s dead, Matt Murdock has become her most trusted ally. But Elektra needs more than just an ally – she needs a partner. And in this issue, Matt and Elektra will grow closer than ever before…

Related: “Kevin Feige, What Are You Waiting For?”, Fans Upset That Beloved MCU Actress Has Not Been Cast In Marvel Reboot

So, with the two Daredevils taking on the Hand by rebuilding the Fist, both Matt Murdock and Elektra Natchios can add another name to their list of monikers. As ScreenRant writes:

…However, after learning Stick is helping them and is responsible for finding the texts of The Fist, both Daredevils end up going on a dangerous test to become the organization’s leaders. The Daredevils face off against an army of undead warriors from The Hand, and after defeating them in a tense battle, they are given the new titles and roles of King and Queen of The Fist.

King and Queen of The Fist is a lofty title for two Devils but as Chip Zdarsky and Rafael De Latorre’s “Daredevil” run continues only time will tell if both of the Marvel Universe’s Daredevils will manage to hold on to it.

Ever since it was revealed that Daredevil would be officially joining the MCU, fans have questioned whether the Disney-owned movie studio would reboot the character or keep his history as made in the Netflix show. While Spider-Man: No Way Home (2021) marked Cox’s first appearance in the MCU, it would be Jessica Gao’s She-Hulk: Attorney at Law that would give Daredevil his proper introduction.

Cox’s performance alongside Tatiana Maslany’s Jennifer Walters/She-Hulk went down well with fans, garnering excitement for his future Marvel Phase Five 18-episode series, Daredevil: Born Again — the series, which shares its name with the famous Frank Miller books, was announced in San Diego Comic-Con’s Hall H over the summer. With Cox and Wilson Fisk/Kingpin actor, Vincent D’Onofrio confirmed for both this and the Hawkeye spinoff, Echo, starring Alaqua Cox as Maya Lopez/Echo, no word yet has been made on whether fan favorites like Karen Page (Deborah Ann Woll) and Foggy Nelson (Elden Henson) will also return.

And as Marvel Studios draws upon stories from the comic book portfolio, it will be interesting to see if Elektra will make an appearance in the MCU canon in the future, whether in Daredevil: Born Again, or another of the many announced — and unannounced — projects.

What do you think of Daredevil’s new name? Let us know in the comments down below!