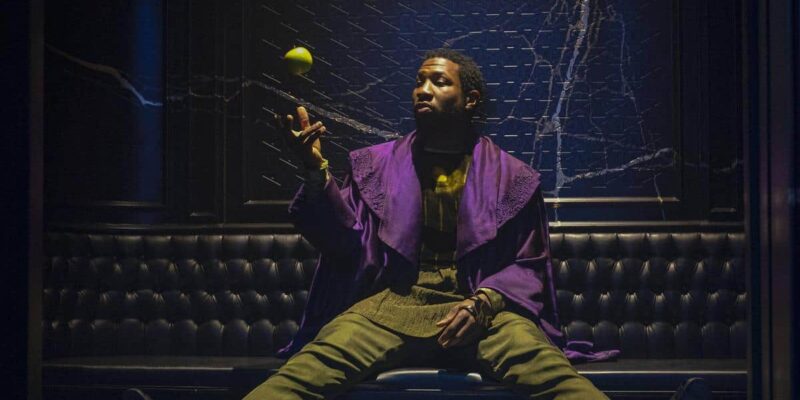 In under six months’ time, the world will be fully introduced to the Marvel Cinematic Universe’s new Big Bad — Kang the Conqueror. Jonathan Majors will bring the classic Marvel Comics character to the silver screen following his outing as the Kang Variant, He Who Remains, in Tom Hiddleston’s Loki.

Ahead of his (expected) long tenure in Kevin Feige’s MCU, Majors has caused a stir online after a series of images left the actor exposed — and the internet cannot handle the heat.

Jonathan Majors, perhaps best known for his role as Montgomery Allen in The Last Black Man in San Francisco (2019) and later as Atticus Sampson “Tic” Freeman in HBO’s Lovecraft Country, the actor will next star in two high-profile movies, Creed III (2023) as Anderson Dame, and in the MCU’s future feature film, Ant-Man and the Wasp: Quantumania (2023).

After a thrilling performance in Loki, Marvel fans have long been awaiting Majors’ return to the superhero franchise, and after a switch up in release slots, Kang will debut sooner than expected in next year’s Ant-Man threequel from director Peyton Reed.

An official trailer has not yet been released for Ant-Man and the Wasp: Quantumania, but in this digital age leaks have found their way to social media offering a glimpse of the chilling Kang the Conqueror as he goes toe-to-toe with the loveable and charming Scott Lang AKA Ant-Man (Paul Rudd) and partner Hope van Dyne/Wasp (Evangeline Lilly).

In addition to his starring role in Ant-Man and the Wasp: Quantumania, Majors is also on board for Michael B. Jordan’s directorial debut, Creed III (2023). The third movie in the Rocky Balboa spinoff series sees the return of Jordan as Adonis “Donnie” Creed and will release next March, not long after Ant-Man 3.

So with a superhero and a boxing movie happening concurrently, it’s no surprise to see that Majors has physically changed. In fact, just weeks ago, Marvel fans decried Scott Lang’s demise after seeing a shirtless photo of Majors on the set of Creed III. Now, a new photoshoot has been shared, and fans are discussing.

Jonathan Majors has risen from indie standout to blockbuster villain in the Marvel and Rocky Cinematic Universes. None of it came easy, which is exactly how he likes it.

Jonathan Majors has risen from indie standout to blockbuster villain in the Marvel and Rocky Cinematic Universes. None of it came easy, which is exactly how he likes it.

And it did not take fans long to trend the actor.

You know… He can kill the avengers I wouldn’t even mind.

Jonathan MAjors what a man

You know… He can kill the avengers I wouldn't even mind.

Jonathan Majors what a man pic.twitter.com/qQqxzQ8Ath

But, in looking deeper, the comments on Majors’ physique continue to ignite a discussion over race and politics. As Henry W. (DrHenryWalshJr) acknowledged:

I really don’t wanna be part of the Jonathan Majors discourse (that happens literally every time a photo of him is posted online), but I do have to say: it’s scary how many of you think desire isn’t political.

I really don't wanna be part of the Jonathan Majors discourse (that happens literally every time a photo of him is posted online), but I do have to say: it's scary how many of you think desire isn't political.

According to reports, Majors gained over 10 pounds of muscle for his role in the MCU, something many other actors have experienced also. Kumail Nanjiani famously stacked on the muscle for his starring role as Kingo in Eternals (2021) and spoke out about the challenges of doing so.

Majors will appear as Kang on February 17, 2023, in Ant-Man and the Wasp: Quantumania directed by Peyton Reed and written by Jeff Loveness. He will star alongside Rudd and Lilly as the titular duo as well as Michael Douglas and Michelle Pfeiffer as Hank Pym and Janet van Dyne, respectively. If fans are expecting Emma Fuhrmann from Avengers: Endgame (2019) as Cassie Lang, then they will be disappointed as Kathryn Newton will now star as Scott’s daughter. Bill Murray has also been cast in an undisclosed role and Marvel Comics villain, MODOK, is set to appear.

Ant-Man and the Wasp: Quantumania will be the first film in the new Marvel Phase Five.

Are you looking forward to seeing Jonathan Majors in Ant-Man and the Wasp: Quantumania? Let us know in the comments down below!