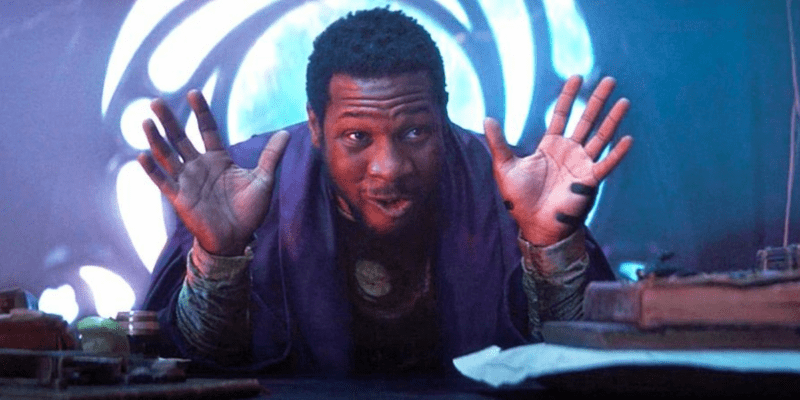 In a surprise release Monday, Marvel Studios unveiled the first poster for the highly anticipated, Ant-Man and the Wasp: Quantumania (2023). The poster not only shows the return of Scott Lang (Paul Rudd) and Hope van Dyne (Evangeline Lilly) in microform but they are also perched on the fingertip of one of the most anxiously awaited villains of the Marvel Cinematic Universe: Kang the Conqueror played by Jonathan Majors.

Introduced in Loki on Disney+ as ‘He Who Remains’, Marvel fans were presented with a verbose, and slightly unhinged variant of the infamous Kang, which was then summarily dispatched by Sylvie (Sophia Di Martino), thereby unleashing the full potential of the Multiverse, and more or less, kicking off the origin of what many feels could be the biggest MCU villain since Thanos!

Fans were also treated this morning to a trailer for the upcoming film, which gave us a closer look at not only Kang, but, tons of returning characters, and a quick glimpse at the introduction of Bill Murray into the MCU! This comes months after fans called out the superhero studio for only showing a version of the trailer exclusively to audiences in San Diego Comic-Con’s Hall H, and later at the D23 Expo 2022 in Anaheim, Southern California.

With so much to take in, it’s one of the most promising MCU trailers in a while! Take a look for yourself at the trailer below!

This February, enter the Quantum Realm.

The trailer shows the Ant-Man family entering the Quantum Realm, and finding an entire universe beneath our own, at the subatomic level. While the details aren’t yet clear, the trailer does make it seem as though they will be stuck at that size, and need to find their way out. Ominously, Kang himself offers his services, in exchange for their ‘help’, concluding the trailer with an ultimatum, “So, what’s it gonna be… Ant-Man?”.

Ant-Man and the Wasp: Quantumania is set to be released on February 17, 2023, and is not only expected to be one of the most important films of the current MCU but will also kick off Phase Five. Will this revitalize the MCU after the troubled Phase Four?

Comments Off on After Fan Discontent, Marvel Finally Unveils First Look at Kang In ‘Quantumania’!