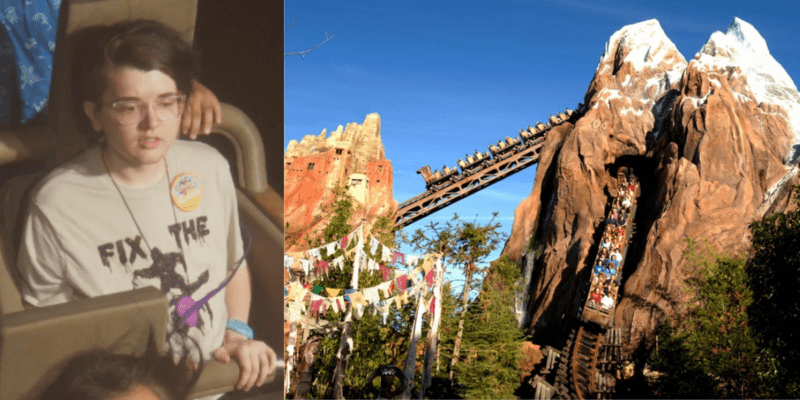 This Walt Disney World Resort Guest was on a mission: to demand that Expedition Everest’s Yeti animatronic be brought back to life. They headed to Disney’s Animal Kingdom, armed with a custom shirt to spread their message:

Speaking my truth today at AK from disneyparks

For those out of the loop, the Yeti has been motionless since 2006, soon after Expedition Everest – Legend of the Forbidden Mountain opened at Disney’s Animal Kingdom. The animatronic was functioning perfectly, but the heavy swinging motions were causing cracks in the mountain’s foundation and putting the ride at risk.

Enter “Disco Yeti” – a flashing spotlight was installed on the motionless Yeti to trick Guests into thinking the audio-animatronic was swinging at them. It isn’t a popular fix. Even Joe Rohde, the legendary Disney Parks Imagineer credited with bringing Disney’s Animal Kingdom to life, desperately wanted to fix the Yeti before his retirement.

Unfortunately, this would mean removing the mountain structure entirely to repair the foundation and then rebuilding a more robust structure from the inside out. Though many fans hoped the Disney Park would begin the extensive construction when Pandora: The World of Avatar opened, it never happened.

When this Guest headed to Disney’s Animal Kingdom, they expected to see Disco Yeti. They didn’t expect another popular effect – a projection of the Yeti that “breaks” the rollercoaster tracks, thus pushing Guests down the mountain’s highest drop – to be out of commission. This led to a hilarious photo of the disappointed Guest heading down Mt. Everest:

Fix The Yeti shirt at AK update: the ride captured the moment I learned that the yeti projector was also currently broken from disneyparks

Expedition Everest – Legend of the Forbidden Mountain is operating normally at the time of this article’s publication. We are not able to confirm if the projection effect has been fixed.

More on Expedition Everest – Legend of the Forbidden Mountain

Careen through icy Himalayan peaks on a speeding train while avoiding the clutches of the mythic Yeti.

Did you ride Expedition Everest before the Yeti went motionless?