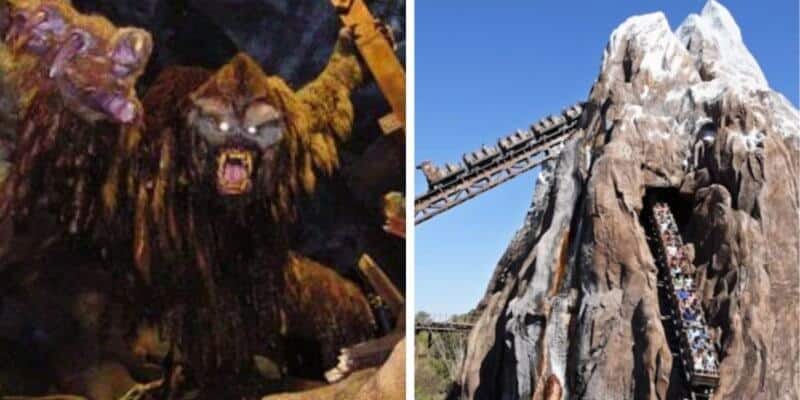 If there is one animatronic Disney fans want to see fixed, it is the yeti in Animal Kingdom’s Expedition Everest.

Expedition Everest is a thrill coaster that brings Guests on an excursion up to the top of Everest, only to discover that the tracks have been broken by the infamous yeti. After being sent backwards through the mountain, Guests then must make a “run” for it and try to escape Mount Everest as they avoid the yeti.

In one of the cave scenes, Guests are met with an up close and personal yeti encounter. In fact, Guests would often scream in fear when the coaster zoomed past the massive yeti animatronic. His hands and arms would swoop down and swing at the riders, making for a thrilling experience.

When you add these movements to the incredible details already incorporated on the animatronic, you have a pretty terrifying attraction moment. However, for quite some time now, the yeti has been broken. Now, a strobe light effect shines on the animatronic, but there is still no active movement.

Aside from Guests begging Disney to fix the animatronic, — Even Disney Imagineer Joe Rhode has chimed in — it seems that some have given up on that idea and moved toward a different solution. Hollie Ballard (@jammyjimjams) Tweeted an idea, expressing:

HOT TAKE … if Disney can’t / won’t fix the yeti… take the strobe off. Let everyone just see him it’s not like you see him for long…

HOT TAKE … if Disney can’t / won’t fix the yeti… take the strobe off. Let everyone just see him it’s not like you see him for long… pic.twitter.com/VBPgFjvwG3

I personally found this to be an interesting idea, as I had never thought of it before! As someone who naturally finds the animatronic terrifying for the quick glimpses that I get to see, this idea sounds like it could be pretty scary. If lit well, Guests can take in the yeti for a little longer than they can now, as the strobe effect only allows for a quick glimpse of the monster.

It seems that Hollie is not the only one who thinks this, as over 300 other Disney fans have liked the Tweet in solidarity. If you want to see what the yeti looked like when in full motion, check out Eddie Biggins’ (@EddieBiggins) response to Hollie’s Tweet below.

I was lucky enough to be an early rider and got video of the Yeti in full motion. Here it is slowed down.

I was lucky enough to be an early rider and got video of the Yeti in full motion. Here it is slowed down. pic.twitter.com/oNfeLeibZK

Again, I personally love this idea and hope to see Disney remove the strobe light and instead, have one active light shine on the yeti so that Guests can really take in the details of this animatronic.

Considering it has been years since the yeti has moved, it seems that fixing the animatronic is not on the top of Disney’s list of priorities. Therefore, perhaps changing up the lighting could be a happy medium!

What do you think? Would you prefer to see the yeti lit better on Expedition Everest?