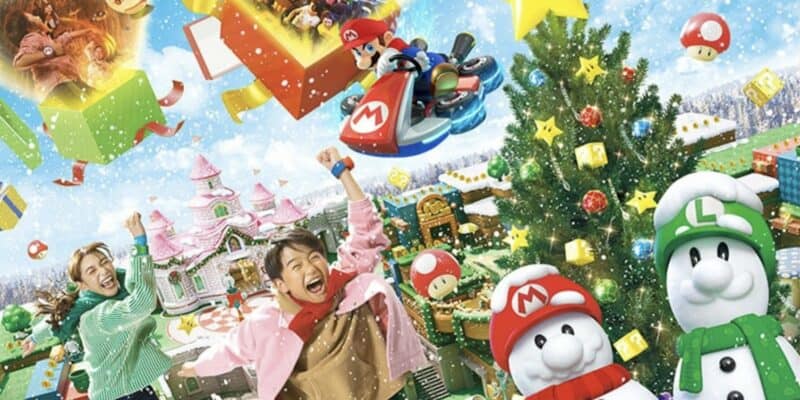 Fans are eager to experience Universal Studios’ latest seasonal offering, which is making its way to the Park very soon!

While most fans are excited to experience all the thrilling offerings at Universal Studios Parks worldwide for the Halloween season, some are ready to welcome the most wonderful time of the year and celebrate the holidays at Universal. Universal Orlando Resort already announced some of the new and returning offerings fans would be able to enjoy while visiting the Park, but a recent announcement has fans overjoyed.

Fans of the Mario Bros. franchise are eager to visit Super Nintendo World at Universal Studios Japan, as themed holiday decorations will make their way to the highly immersive land for the first time ever. The Park mentions that unique decorations in the land’s different greeting areas will be available, as well as at Superstar Plaza. In addition, Guests will be able to enjoy limited-time dining and merchandise offerings, making Super Nintendo World the perfect destination this holiday season.

Guests visiting the Park during the holiday season can also enjoy the return of the beloved “NO LIMIT! Crystal Tree,” returning to the Park for the first time in three years, a breathtaking spectacle of lights, and special events at Universal Wonderland and Minion Park.

Holiday celebrations will take place at Universal Studios Japan from November 11, 2022, through January 9, 2023.

While fans are eager to experience this all-new holiday offering in Japan, it is inevitable to think of all the possibilities that could come to Universal Parks in America with the opening of Super Nintendo World at Universal Studios Hollywood in California and Universal’s Epic Universe in Orlando, Florida.

Super Nintendo World is scheduled to open in early 2023 in the California theme park, though no official date has been announced yet. And in Orlando, Epic Universe continues to show significant progress, making fans eager to visit the brand-new theme park once it opens in 2025.

While both new lands will surely bring so much for fans to see and do, there are no official plans to bring similar decorations to California and Florida at the moment. Inside the Magic will update you as soon as more details are released regarding the development of Super Nintendo World in America.

Have you visited Super Nintendo World in Universal Studios Japan? Tell us about it in the comments below!