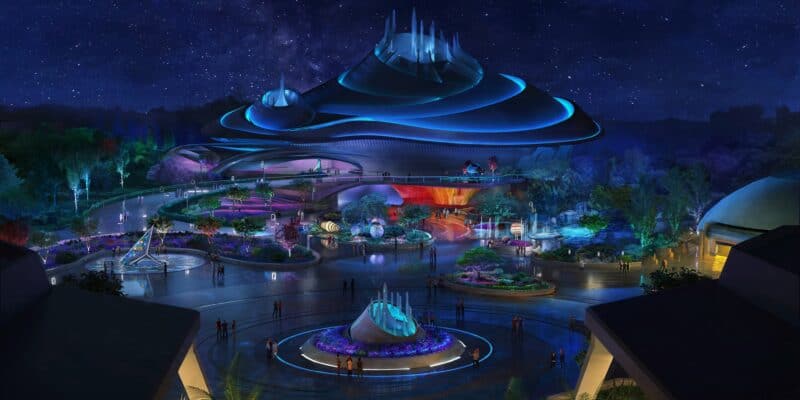 There’s a confirmed timeline now for the Space Mountain and Tomorrowland Plaza retheme, and a new first look!

This year’s D23 Expo held in California had its Disney Parks panel held just today. Presented by Josh D’Amaro, The Walt Disney Company’s Chairperson of Walt Disney Parks and Resorts, the Parks panel revealed that the Space Mountain and Tomorrowland Plaza retheme and rework is officially underway — and that we now have the timeline formally confirmed, along with a gorgeous new image showcasing the upcoming Land.

Things are being shaken up over at the Disney Parks, if the D23 panel is to be believed. There were teases by The Walt Disney Company and Imagineering departments featuring new looks at the upcoming “Villains Land” addition at Walt Disney World’s Magic Kingdom, a Coco and Encanto shared land, and the possible overhaul of Dinoland, as well as sneak peeks at the breathtaking new animatronics for the Frozen land.

One thing that’s confirmed though? The Space Mountain and Tomorrowland Plaza retheme.

Walt Disney himself famously said in a quote forever immortalized in the famous plaque:

Here you leave today and enter the world of yesterday, tomorrow, and fantasy.

Tomorrowland was originally imagined to showcase the “Worlds of Tomorrow” aspect of Walt Disney’s original Disneyland theme park concept. Although the worlds of “Yesterday” and “Fantasy” can remain as they are, over the years, Tomorrowland specifically has suffered the inevitable problem of “Tomorrow” always becoming “Today”.

The Tomorrowland retheme, therefore, has in a way been a long time coming, as The Walt Disney Company struggles to keep up with the times. Rides like Autopia highlighting the “modernity” of gas-powered automobile cars, submarines that used to be cutting edge, and rockets flying to the moon are no longer the wild imaginings of a future that has yet to arrive.

Although this is only happening at one Park currently, its success could mean big changes for other Tomorrowland areas at other Disney Parks.

This retheme is going to focus on “reimagining” Tomorrowland, as the Oriental Land Company’s press release originally stated regarding the Space Mountain ride change:

This entirely new attraction will maintain its original concept as an
indoor roller coaster, but will have enhanced performance and immersive special effects that
will give guests even more thrills on this exciting rocket ride.

While the Tomorrowland rework is detailed as follows:

This image was also shared of the new Land at night, with glowing lights, curved-edged architecture, mixed with greenery and flowers lit up in the dark — all very “solarpunk”.

The retheme for the full Tomorrowland Plaza on the other hand will only be complete in 2027. We’re expecting it to be somewhat gradual, so as not to shut the popular Land for three years or so.

Beginning in 2024, Space Mountain at Tokyo Disneyland will undergo a transformation that will bring a new story and experience to the iconic attraction. #D23Expo

Beginning in 2024, Space Mountain at Tokyo Disneyland will undergo a transformation that will bring a new story and experience to the iconic attraction. #D23Expo pic.twitter.com/G9bSLSI1O0

The new reimagining of this beloved space within the Disney Parks could potentially make its way to other Parks internationally — perhaps we will see Orlando, Florida’s Walt Disney World, and the Magic Kingdom undergo a similar change, or even California’s Disneyland Resort.

The eternal problem of Tomorrowland rears its head again, and if this retheme goes down well in the Tokyo Disney Resort and Tokyo Disneyland, we might even see the similar work being done to other “Tomorrowlands” worldwide.

What do you think of this Tomorrowland and Space Mountain retheme? Share your thoughts in the comments below!