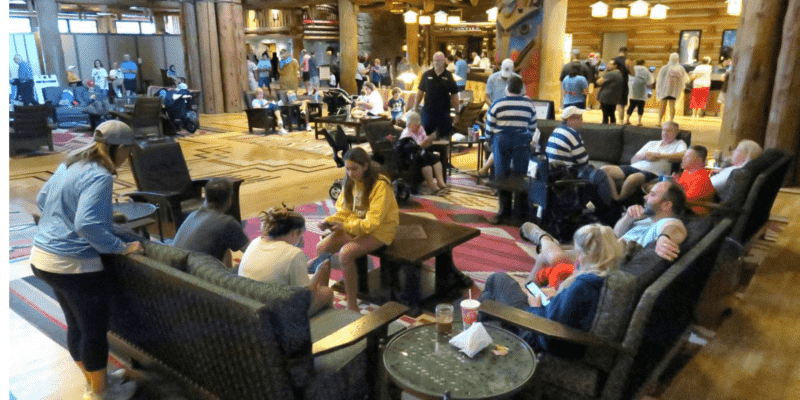 Hurricane Ian made landfall on Wednesday as a powerful Category 4 storm, with wind speeds that nearly placed it into the Category 5 classification. The forecasted arrival of the storm has rendered much of Florida inoperable as schools, stores, airports, and theme parks closed their doors in preparation for the hurricane. Disney World announced plans to close for the duration of the storm, but Guests are still on Disney property as Hurricane Ian continues its path of destruction through the state.

On Wednesday, Disney World issued a “shelter in place” directive to Guests at Disney’s Resort Hotels, saying no Guests would be checked-in after 3:00 p.m. on Wednesday. Disney also informed Guests that dining options would be extremely limited and offered boxed “hurricane meals” for purchase.

As with any hurricane, there’s surely a certain amount of stress and chaos involved for all those affected by the storm, whether in its direct path or not. And Guests staying on property at the Walt Disney World Resort are not immune from that stress and chaos. In fact, stressful situations like preparing for and riding out a hurricane can bring out the, well, true colors in all of us–even when we’re Guests at Disney World.

Ultimately, there are about five different kinds of Guests you might encounter (or become) when dealing with a stressful situation like an impending hurricane at Disney World, and only one of them is pleasant.

The “Disney Should Have Known” Guest

After all, it’s a huge waste of time, money, and energy, and why should they be stuck in their Resort hotel room with only the visage of a Disney Park outside their windows, especially if the storm isn’t really coming this way? Disney’s figured out exactly where they’re going to place an Encanto-themed attraction at Magic Kingdom, and it hasn’t even been created yet, so why can’t they figure this one out too?

The Entitled “Disney Should Take Care of Us” Guest

As has been the case during preparations for Hurricane Ian’s arrival, in the event of an emergency or unprecedented event at Disney World, some Guests become angry with Cast Members for not ignoring and neglecting all other Guests, taking away other Guests’ reservations, and focusing solely on them–nevermind the thousands of Guests experiencing a similar experience, thanks to a massive hurricane calling the shots.

They become furious that Cast Members refuse to have extra hotel rooms in reserves, and then handing them out–to Guests who deserve them only–as though there were an endless supply being funneled to the hotel from a massive vending machine in a vacant storage lot behind Animal Kingdom. This has been the case–even among Disney Vacation Club members–during preparations for Ian, as some have taken to Reddit to air their frustrations about not being able to extend their stay once their reservation was complete. One DVC member posted the following:

“Disney is not accommodating DVC points renters during hurricane. Our checkout day was today, but airport/resort/parks closed… so we’re stuck… Boardwalk staff tell us there is not a room to be had in all of Disney and we have to make arrangements elsewhere. All of this “they’ll take care of the guests and make sure they’re safe” appears to be false…more like Mickey thanks you for your ticket money, genie plus lightning lane food and more purchases… here’s your bill … good luck finding a lyft.”

The Redditor was no doubt seeking sympathy from fellow Redditors, but the majority of the community told the DVC member that Disney simply cannot offer rooms that are unavailable. In other words, even Disney World can’t magically offer up rooms that don’t exist. One Redditor pointed out the sense of entitlement in the original Redditor’s post with a response.

Reports from the Orlando Sentinel detail Guests making the most of their time as they are forced to stay indoors and “shelter in place” at Disney World Resort hotels. (I mean, there are worse places to be, ya know?)

But some Guests don’t understand that a shelter-in-place directive means exactly what it says: that there is a need for Guests to take cover (shelter) where they are (in place). And in true Disney fashion, many Cast Members who work at Disney World’s Resort hotels aren’t with their families at this time; rather, they are staying as Guests of the hotels as well (at night) and rising in the morning to take care of Guests (by day).

The Sentinel reports that some of Disney’s Resort hotels are offering activities like arts and crafts. Costumed Disney characters are also making the rounds, and there are complimentary arcade games to keep restless kids occupied. Those niceties are clearly complimentary offerings to Guests in an effort to make a less-than-enjoyable experience as magical as possible, so everyone’s appreciative, right?

Wrong. That’s because some Guests simply think it’s Disney’s responsibility to cater to and coddle them–even though everyone in the house is going through the same scenario. In their way of thinking, Cast Members should be hard at work “making up” for everything they’re missing out on because of the hurricane, as though Disney controls the weather. (And we’ve already talked about this; Disney does NOT control the weather, but they do control the mosquitoes!)

The “Disney Better Give Us Free Stuff” Guest

They’re the ones who are offended when they log in to the My Disney Experience app to place a mobile order and discover there’s a charge. (The nerve!) They think it’s preposterous that Disney would charge Guests for food “at a time like this.” Don’t these Cast Members realize that it’s devastating to have a Disney vacation ruined by the angry beast of a hurricane?? Why not pile ashes on their heads, add insult to injury, fuel to the fire–and make Guests pay for their food???

They’re also the Guests who, upon checkout after the storm passes–expect there to be a stamp of jubilee on their bills–a nice little pleasantry to send them on their way home: a tiny message on their bill that says, “Stay safe! No charge. See ya real soon!” And when that’s not the case, they’re also the Guests that will climb up the proverbial chain of command at the concierge on checkout day to explain 46 reasons why they deserve their entire stay to be pro bono.

The “How Are YOU Doing” Guest

This Guest is the only truly pleasant one on the list, and when you see this Guest, you revel in the delight you feel after having even a tiny exchange with her. She’s concerned about others and wants to do all she can to be sure that others around her are calm, comfortable, and well-cared for. She is a gem, a rare jewel.

It’s the Guest that takes it upon himself to make his way around the room and strike up momentary conversations with perfect strangers, unified by this common catastrophe. It’s the Guest who decides that even though he’s having a hard time missing out on his Disney trip, he’s going to do all he can to see that others are doing ok throughout this ordeal. It’s the Guest who–just by being in the room, smiling at you, asking you how you’re doing, offering a helping hand to a Cast Member, holding the door open–spreads a little joy and pixie dust wherever she goes.

As with any challenging scenario in life, the difficulties often bring out our true colors, but inside a crowded Disney World hotel common area during a lockdown as Guests ride out a massive hurricane together with hundreds of total strangers, here’s hoping the good outweighs all else, and that selflessness reigns supreme.

God bless all those in Ian’s path.