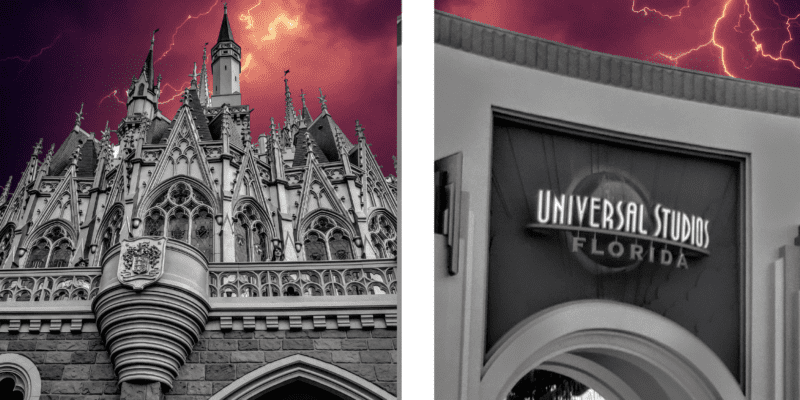 The rivalry between Universal Studios Orlando and the Walt Disney World Resort isn’t exactly under wraps.

Not only do Universal fans and Disney fans participate in said rivalry, but Universal Studios routinely takes to social media to poke fun at Disney World, especially when it comes to new offerings, such as Star Wars: Galactic Starcruiser and the insane line of Guests waiting to purchase a Figment-themed popcorn bucket earlier this year. And that’s just the tip of the proverbial iceberg.

According to The Street, Universal truly became a rival of Disney World when it added the Wizarding World of Harry Potter to its Central Florida theme park resort.

“When ‘The Wizarding World of Harry Potter’ first opened in 2010, it changed the theme park game,” a post dated September 18, 2022, reads. “The themed land wasn’t just a collection of rides, shops, and restaurants; it was an immersive world that took visitors into an entirely different place. Fans of the books and movies could literally experience the world they had read about with every detail being considered.”

“The addition of those two lands forced Disney to change its strategy and begin heavy investments in the four Disney World theme parks. Harry Potter made Universal Studios a rival for vacationers, and the Mouse House rose to the challenge by adding Pandora: The World of Avatar at Disney’s Animal Kingdom, and Toy Story Land and Star Wars: Galaxy’s Edge at Hollywood Studios.”

Disney was holding its own. That is, until Universal Studios announced its plans for a brand-new theme park in Florida, called Epic Universe.

What we do know about Epic Universe is that it is proposed to be, well, epic. We’re told it will have new offerings for visitors to the resort, including an immersive Nintendo-themed world that will feature some of the rides found at Universal’s theme park in Japan and an area inspired by the popular How to Train Your Dragon series.

According to The Street’s post, there have even been rumors about the possibility of a new Harry Potter-themed expansion, as well as a land based on Universal’s classic movie monsters such as those which feature Dracula, Frankenstein, Wolf Man, and other creepy characters.

No doubt the new theme park had Disney on its heels. But everything changed during the D23 Expo in Anaheim, California, held on September 9, 10, and 11. On the third day of the Expo, the President of Disney’s Parks, Products, and Experiences division, Josh D’Amaro, hinted at, teased about, and darn near gave away details about Disney Parks’ newest plan of attack against Comcast and Universal’s latest efforts in what some refer to as “an escalating arms race” between the two largest theme park resorts in Central Florida.

“What we’re going to talk about next is way early in the creative process,” D’Amaro said during the D23 Expo Parks Panel. “It’s what our Imagineers call ‘Blue Sky.’ I want to be clear with everybody in here though; we are not daydreaming. It’s important to me that you know that these things that we’re going to talk about . . . are very real. They’re very serious discussions that I’m having with our teams about the future of our parks and experiences.”

So what was D’Amaro talking about?

Simply put, he was hinting about a massive Magic Kingdom expansion–one that looks at all that could take place if we (the eager and hopeful conglomerate) step over Big Thunder Mountain in Frontierland and dream about what could be added on the other side. Among the possibilities upon which D’Amaro touched were a Disney Villains-themed area (perhaps to rival Universal’s area devoted to Dracula, Frankenstein, and Wolf Man?), an Encanto-themed area (perhaps to rival Universal’s area inspired by another fan-favorite film franchise: How to Train Your Dragon?), and even an area inspired by PIXAR’s Coco.

By D’Amaro’s own admission, these ideas aren’t “daydreaming,” but “very real” prospects for the area to the west of Big Thunder Mountain. And while fans can only speculate about the timeline for such an expansion, one thing seems crystal clear: that Disney Parks intends to create a diversion for Guests so that they aren’t wooed and wowed away by Universal’s new “epic” offering.

Sadly, many Guests were hoping The Walt Disney Company and Disney Parks were moving closer to an era of making changes and expanding the parks in response to suggestions, requests, and propositions from Guests. But it would appear that the offerings are more about beating the competition, rather than bettering the Guest experience at Walt Disney World, and while we aren’t saying we wouldn’t love to see such an expansion, part of us wishes it was being talked about for the right reasons: the millions of Guests who storm the gates (and sometimes the castle walls) at Disney World.

But for all its one-of-a-kind theme park offerings and state-of-the-art ride technology, Disney still hasn’t mastered the art of listening to the consumer, and the day they do will be “epic” indeed, make no mistake about that.