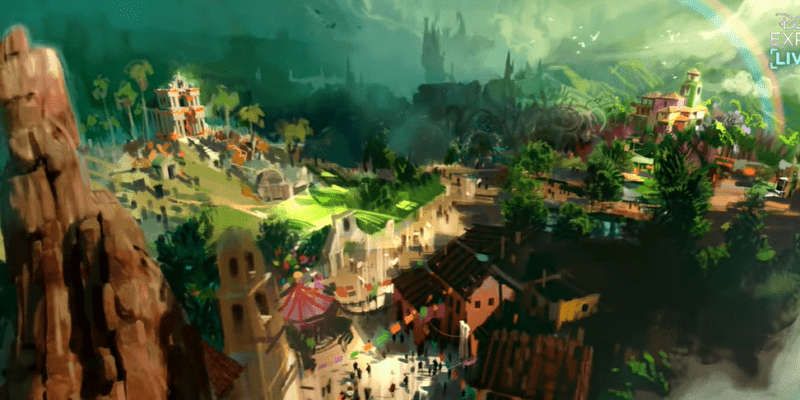 At Magic Kingdom, there is already so much to see and do!

Cinderella Castle is currently decked out for the 50th anniversary celebration of Walt Disney World Resort, and Festival of Fantasy and Mickey’s Royal Friendship Faire have officially returned.

You can ride the three big mountains: Space Mountain, Splash Mountain (while there’s time left), and Big Thunder Mountain, or calm things down on Peter Pan’s Flight. There are also many iconic attractions that you certainly won’t want to miss out on, including Haunted Mansion, Pirates of the Caribbean, Jungle Cruise, and “it’s a small world”.

To top things off, you can close your night with the fireworks show Disney Enchantment– for now– until Happily Ever After makes its triumphant return beginning next year.

But, there’s going to be much more at the Disney Park than just these attractions and entertainment offerings in the future.

During the “A Boundless Future: Disney Parks, Experiences and Products” presentation at the D23 Expo this past weekend, Chairman of Parks and Resorts Josh D’Amaro shared some teasers for what might be happening in the future at Disney Parks.

He talked about the future of Dinoland, U.S.A., which is going to be replaced in the future, but didn’t give a clear indication on what might be taking over the space. However, he did tease the possibility of Zootopia, Coco, or even Moana taking over the area.

But, what had fans even more excited were the potential ideas for the future of Magic Kingdom.

Walt Disney World’s largest theme park and the first to be built, Magic Kingdom houses a plethora of attractions and experiences that simply can’t be described any other way than “magical.”

During the panel, Imagineering Portfolio Creative Executive Chris Beatty shared, “Magic Kingdom holds a special place in my heart. I think there are so many amazing stories yet to be told – lands to be explored.”

So, what were these expansion ideas? Here’s a look…

During the presentation, D’Amaro talked about the possibility of an Encanto land in a discussion about what could be “Beyond Big Thunder Mountain.”

Prior to the Parks Panel, Disney CEO Bob Chapek even teased Encanto coming to the Disney Parks when talking about the movie as a franchise.

“Absolutely. We fully believe that. We’ve had titles in the past that, frankly, we put out in theatrical exhibition world [like] Encanto. It was a modest success theatrically and then we put it into Disney+ and it shot up to No. 1. I don’t have to tell you the phenomenon it became from a merchandise standpoint and from a music standpoint and how many more people saw it on Disney+.”

Much of the same concept, D’Amaro pitched the idea of what if you were able to join Miguel as he embarks on an extraordinary journey to the magical land of his ancestors, The Land of the Dead. What if you could meet the charming trickster Hector and uncover the mysteries behind Miguel’s family’s stories and traditions?

There are plenty of interesting ideas of how a Coco land could work in the Disney Park and what it would be like. Over at Disney California Adventure in Disneyland Resort, Guests can visit the Plaza de Familia until November 2 to celebrate “the Everlasting Bonds of Family and the Spirit of Día de Los Muertos.”

Disney describes the offering this way:

During A Musical Celebration of Coco, enjoy a heartwarming tale by the entertaining Storytellers of Plaza de la Familia that celebrates popular songs from the film Coco, including “Remember Me,” the Oscar®-winning Best Original Song.

In between performances of A Musical Celebration of Coco, you can meet and create special memories by taking a photo with the film’s main character Miguel.

Then stroll over to the iconic Mexican Árbol de la Vida (Tree of Life) and post personal messages to your loved ones on the Memory Wall. You may also design your own paper alebrije masks of Dante and Pepita, spirit guides from Coco. Enjoy stirring Mariachi concerts performed on the bandstand while you dine on delicious Mexican food at Paradise Garden Grill.

Perhaps some of these ideas could be presented in a much larger scale with this expansion.

Perhaps the furthest expansion of them all is Disney Villains land, if it ever does happen.

Disney fans have been begging for a section dedicated to Disney Villains in the past and it seems the company has at least heard their wish, but this expansion could be years down the road and may never happen.

Scar (The Lion King), Ursula (The Little Mermaid), Cruella de Vil (101 Dalmatians), Maleficent (Sleeping Beauty) Jafar (Aladdin), Gaston (Beauty and the Beast), and The Evil Queen (Snow White and the Seven Dwarfs) are just a few of the examples of characters we could see inhabit this land.

How Disney would bring to life these characters into a ride and what kinds of entertainment would be offered is still very much up in the air, but the idea is certainly exciting.

It’s important to note that these announcements are just teasers and could be canceled or changed at any time. No further details have been announced about possible Magic Kingdom expansions. D’Amaro noted that the villains expansion is the furthest in the future of them all.

Are there more ideas out there?

Disney only made us privy to three potential expansions, but that doesn’t mean that these have been the only lands discussed.

Cars Land over at Disney California Adventure has been a huge hit since it opened and this might be a consideration for Walt Disney World Resort in the future, whether it be at Magic Kingdom or at another Disney Park, like Disney’s Hollywood Studios, for example.

We also don’t know what other Disney movies may become major hits in the future and how these might affect the future of the theme parks, as well.

How long could this Magic Kingdom expansion take?

Ultimately, no one– possibly even Disney– knows how long these expansions could take. Every Disney fan points to TRON Lightcylce/Run and how long this attraction has taken to open. And, this was just one roller coaster.

With none of these expansions being confirmed, it would stand to reason that we could still be a year or more out from the project being officially announced. From there, even when construction begins, you’re talking about years down the road.

Universal Orlando has been working at hyper speed to open the Epic Universe in 2025 and this expansion might be Disney’s response to that. With TRON Lightcycle/Run opening in 2023 and Tiana’s Bayou Adventure opening in 2024, Disney may be looking to begin construction on this land at some point towards the end of next year (or the beginning of 2024) with the sights on opening in late 2025 or 2026.

However, all of this is just speculation at the moment and no one will truly know– even when the first announcement comes– how long it will take before we can see any of these ideas come to life.

What do you think of the teasers for what’s “Beyond Big Thunder Mountain?” Let us know in the comments!