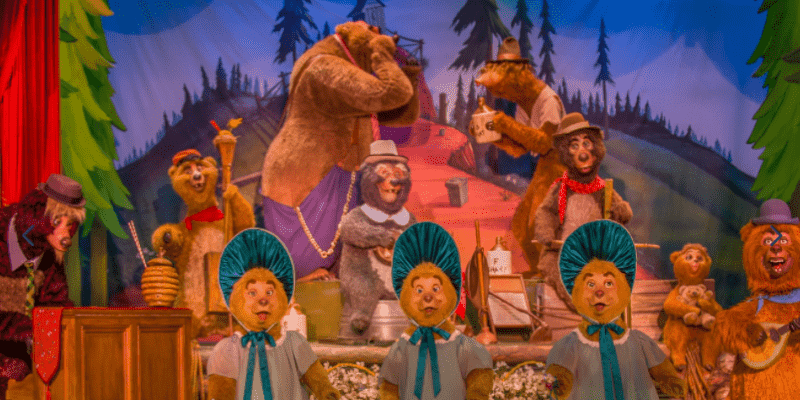 Everyone is talking about Bruno, even the Country Bears at Walt Disney World Resort.

“We Don’t Talk About Bruno,” the popular song from Disney’s Encanto (2021) that has since topped Frozen‘s “Let It Go” on the charts, has become very popular on TikTok and is now Oscar-nominated.

We can even see characters like Mirabel Madrigal (Stephanie Beatriz) at Disneyland Resort and Disney California Adventure conducting meet and greets with Guests. The film features music by Hamilton creator Lin Manuel Miranda and the voices of Stephanie Beatriz, John Leguizamo, and Wilmer Valderrama.

While they likely won’t be singing “We Don’t Talk About Bruno,” you can hear a medley of original and classic tunes.

This Hootenanny is a Real Hoot

Step inside the rustic theater known as Grizzly Hall and take your seat before the lights dim. Clap along as 18 Audio-Animatronics hillbilly bears play and sing during this 16-minute, foot-stompin’ cele-bear-tion. You’ll hear a medley of original and classic tunes—all performed by the zaniest critters in the woods. Overflowing with humor, heart and a few surprises, this crowd-pleasing show features a down-home, southern sensibility you and your cubs will love.

Magic Kingdom is home to many iconic attractions and sights, such as Cinderella Castle, Jungle Cruise, Splash Mountain, Space Mountain, “it’s a small world,” Pirates of the Caribbean, Haunted Mansion, The Many Adventures of Winnie the Pooh and many more.