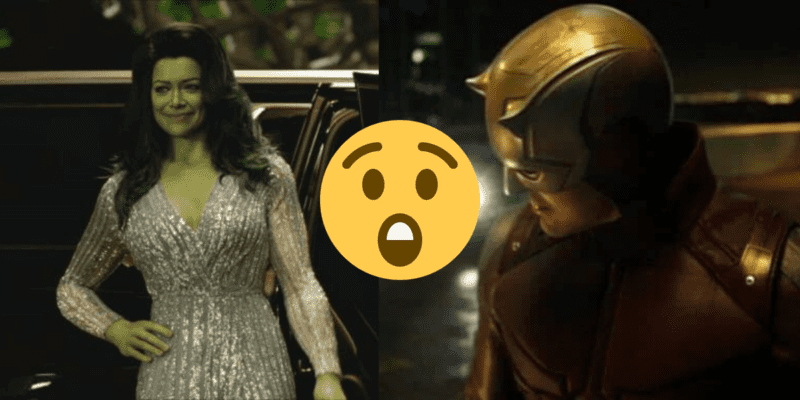 Another superhuman lawyer might be on his way to She-Hulk: Attorney at Law.

The fifth episode of the controversial Disney+ series started streaming today and fans are excited about one special Marvel Cinematic Unvierse cameo. The trailer for this episode saw a brief clip of Matt Murdock/Daredevil (Charlie Cox), but unfortunately, he wasn’t in the episode.

Instead, we see a brief glimpse at Daredevil’s iconic helmet. While Jennifer Walters (Tatiana Maslany) tries on custom suits, fashion designer Luke Jacobson (Griffin Matthews) yells about client confidentiality and leaving things out in the open. He quickly picks up a box with Matt Murdock’s helmet inside and hides it away.

Fans hope to get a glimpse of Murdock in She-Hulk ahead of an all-new Disney+ Daredevil series, which is still in the works. The series will star Charlie Cox as Matt Murdock (Daredevil) and Vincent D’Onofrio as the villainous Kingpin.

The pair originally appeared in Netflix’s Daredevil from 2015 to 2018, though that series now streams on Disney+. However, both Cox and D’Onofrio have since made cameos in Disney-owned Marvel projects. Cox made a cameo in Spider-Man: No Way Home (2021) and D’Onofrio reprised his role as Wilson Fisk in Hawkeye, another Disney+ exclusive series.

Matt Murdock is an attorney just like Jennifer Walters, but he leads the life she dreams of. No one knows that Murdock is also Daredevil, while Walters has been forced to make a career out of her superpowers.

Fans believe the MCU pair is likely to bond over their shared experiences, and maybe more. Because of a brief clip of Walters saying an unknown man “is really kind of doing it” for her, some think there might be a romantic connection.

Would you like to see Matt Murdock in She-Hulk: Attorney at Law?