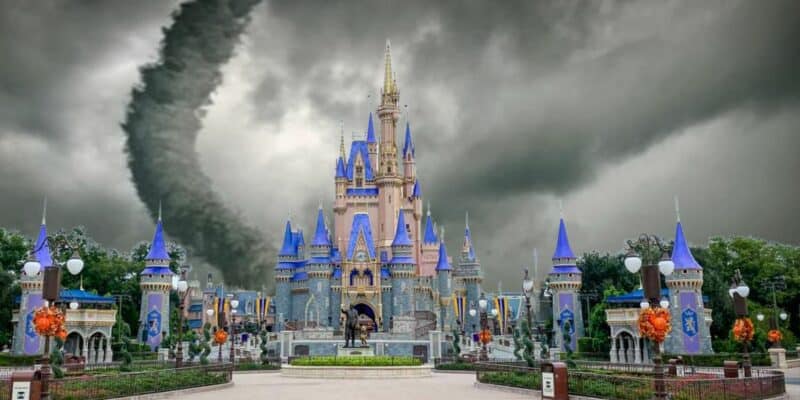 Last Thursday, droves of users clicked on posts about a tornado at Disney World’s EPCOT.

The “tornado” appeared to burst forth from the clouds downward toward the earth–Spaceship Earth, to be exact. And while it’s evident from the photos that the twister itself was not touching the structure of the iconic attraction at Disney World’s second park, those droves of users, both enamored by the sight and shocked by such a spectacle and the possibility of something so scary happening at the Most Magical Place on Earth, nearly crashed the internet for us all as they rushed to the photo and corresponding posts like moths to a flame.

But alas, in spite of what the above photo seems to depict, there was, in fact, no tornado at EPCOT last week. No, it wasn’t PhotoShopped. It wasn’t digitally altered in any way. It’s a photo taken by a Guest at the park, and it’s the image of exactly what played out in the skies over EPCOT that day.

But this writer hails from the Lone Star State–the most southern state in the Union that’s both unnecessarily hot and humid most of the year and within the confines of the elusive and mysterious Tornado Alley segment of the U. S. And I’ve seen enough wall clouds and twisters in my lifetime (and participated in enough tornado drills and taken cover inside enough bathtubs) to know that the “tornado” in the photo above is no tornado at all.

Contrary to what some think, Florida’s weather patterns and subtropical humid climate do not lend themselves to rendering the Sunshine State devoid of tornadoes–not by a long shot. TornadoExtreme.com says that in an average year, as many as 60 tornadoes touch down and make their marks of varying degrees in Florida. (Texas, by comparison, sees more than 150 per year–how’s that for a Travel Texas Tourism campaign??)

But alas, last Thursday’s weather event didn’t count toward Florida’s grand total of tornadoes for 2022. Instead, Mother Nature played a hoax on unsuspecting Disney World Guests, as the “twister” over EPCOT had most every appearance of being the real thing, but it was not.

But I’m no meteorologist, so don’t take my word for it.

The spectacle at EPCOT on Thursday, which was captured by dozens of Guests at the park that day, was–in reality–what meteorologists, weather watchers, storm chasers, and various other “weather people” refer to as a SCUD, a Scattered Cumulus (cloud) Under Deck, according to a post from FOX35 Orlando.

A SCUD can look like a jagged cloud that appears to hang in the sky below the clouds that surround them, and they often form points or tips that make them look very much like funnel clouds that are typically seen as a tornado forms and approaches the ground below it. SCUD clouds, however, are simply smaller bits of condensation that don’t usually attach to higher levels of clouds that accompany these sometimes severe weather events.

A funnel cloud, on the other hand, is a tight, rotating column of air that often precedes a tornado touchdown, but even funnel clouds don’t touch the earth. If you see a “funnel cloud” touchdown, you’re actually watching a tornado.

WHSV Channel 3 explains the “hoax” created by Mother Nature as it pertains to SCUD clouds:

SCUD clouds can be misleading. They can look scary and can look very similar to a tornado. Scud clouds are low-lying clouds that are usually below storm clouds. The catch about SCUD clouds is that they are very wispy and loose. They may look like tornadoes in a sense, but these clouds do not even rotate.

A SCUD doesn’t rotate, and the rotation of a tornado is what’s largely responsible for deaths, debris, damage, and destruction brought about by tornadic activity. Because a SCUD cloud is unable to rotate, the risk of damage caused by one is pretty close to zero. In fact, we don’t want to tempt Mother Nature here, but it’s safe to say that SCUD clouds, like the one seen at Disney World last week, are virtually harmless on their own. However, because SCUD clouds often accompany severe weather patterns like thunderstorms, which can produce high winds, heavy rainfall (and flash-flooding), hail, and lightning, they may signal the need to seek shelter until the storm passes.

If you’re ever at a Disney Park and notice clouds that resemble funnels or a full-blown tornado (and you didn’t graduate from the Florida Institute of Technology with your degree in meteorology), it’s best to play it safe. Seek shelter and pay close attention to Cast Members’ instructions, especially when rides and attractions are being evacuated.

Let the experts call a SCUD a SCUD. They can diffuse the hoax later. Your job is to stay safe NOW.