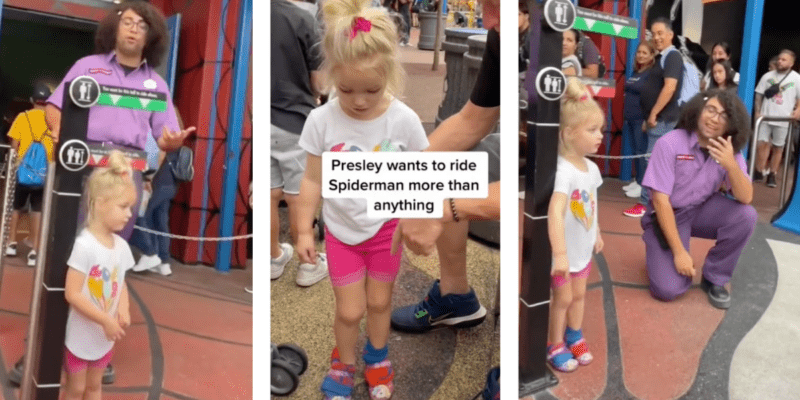 When influencers a social media platform, many feel they have a responsibility to model safe and responsible behavior to their audiences. One TikTok family channel discovered that this week when they shared a video from Universal Orlando Resort.

While visiting Universal Islands of Adventure, @thehartigfamily attempted to get their daughter, Presley, on The Amazing Adventures of Spider-Man. The ride has a 40” height requirement, and Presley was just a bit too short. Instead of taking her on a different attraction, the family put her hair in a tall bun and altered her shoes to make her appear taller.

In the video, a Universal Team Member said that unless the family was willing to take down Presley’s hairdo, she wouldn’t be allowed on the ride because he believed she was too short. After backlash, The Hartig Family deleted the video. However, many creators shared it with commentary, like @blackwidowmili:

#stitch with @thehartigfamily be careful of how you post things and think twice before placing your baby in Danger.simply follow the rules and requirements . You owe that worker an apology for shaming him for just doing his job.

“To remind you that a couple months ago, a guy that was literally three times her size actually died in a rollercoaster for not following the requirements of the ride,” she explained. “And as I’m seeing, she is very, very little. And me knowing that ride, she can easily slip out.”

#stitch with @thehartigfamily PLEASE, Do not sent hateful messages to this family. Just our two cents on trying to get our kids on rides at theme parks. We shouldn’t be doing this because the rules are here to keep us and our kids safe. #fyp #fypシ #foryoupage

“It’s very disappointing to see a creator on this platform with a million followers doing something like this,” he said. “Rules like this are in place to ensure Guest safety on these rides, and by adding extra socks, putting the hair up, and doing all this stuff, standing on her tippy toes… that’s all trying to skirt these rules.”

Many commenters agreed with the family’s decision to remove the video and said they owe the Universal Team Member an apology. “Our daughter was too short by like 1/8 of an inch to ride Aerosmith, we just smiled and said “Next time!” Why is that so hard for people??” Kymberlee Graves wrote.

“I am a short adult. If I was told I am too short for a ride I would just accept it. My grandsons must be tall enough or it is a no go,” @lisbetgabrielle said.

The Hartig Family hasn’t commented further on the now-deleted video.

More on The Amazing Adventures of Spider-Man

Join Peter Parker on this iconic attraction that combines 3D technology with practical effects that will blow your mind. From Universal Orlando Resort:

Strap on your 3-D glasses and join the world’s most famous webslinger on a high-flying adventure. Villains have stolen the Statue of Liberty and it’s up to Spidey to save the day. Face a cast of Marvel characters as you soar above the streets, scale skyscrapers and battle bad guys left and right. Just watch out for the 400-foot freefall.

Please follow all height requirements and safety guidelines while visiting Universal Orlando Resort and any other Theme Park.