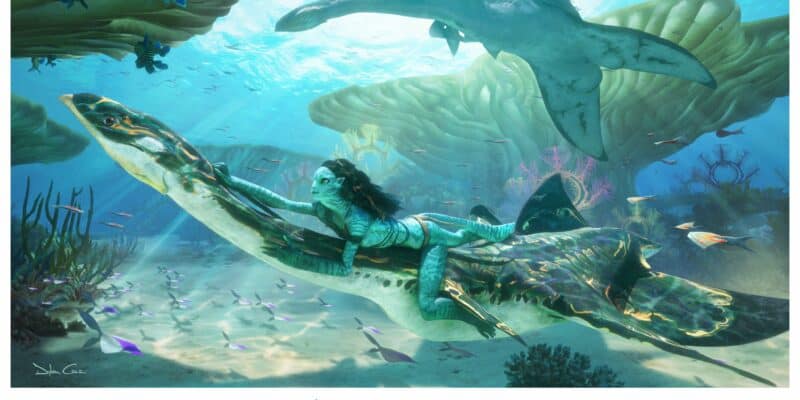 D23 Expo attendees got an exclusive first look at the long-awaited sequel Avatar: The Way of Water during this year’s Studios presentation.

Since the release of James Cameron’s Avatar in 2009, fans have eagerly waited to experience more of the breathtaking world of Pandora. And thanks to this year’s Disney D23 Expo, fans got an exclusive sneak peek at the highly anticipated sequel, Avatar: The Way of Water.

During this year’s Studios presentation, which revealed the latest updates on upcoming projects from Marvel, Star Wars, and other Disney productions, Director James Cameron turned the panel into a 3D movie theater, as attendees received a pair of 3D glasses to enjoy an exclusive preview of a few sequences from the years-in-the-making project.

Theme parks and entertainment digital journalist Ashley Carter (@AshleyLCarter1), who was present at the event, shared a look at these glasses and shared her opinion on some of the footage that was shown during the presentation, commenting that “The footage, especially the underwater scenes, was gorgeous.”

The audience at #D23Expo2022 got an exclusive sneak peek at Avatar The Way of Water. 3D glasses were handed out and we were shown a few clips from the film. The footage, especially the underwater scenes, was gorgeous.

The audience at #D23Expo2022 got an exclusive sneak peek at Avatar The Way of Water. 3D glasses were handed out and we were shown a few clips from the film. The footage, especially the underwater scenes, was gorgeous. pic.twitter.com/miT4n5lZ8C

Although Director James Cameron was not present on the stage and joined the presentation via video call from New Zealand, the cast took the floor during the presentation, including Zoe Saldaña, Sigourney Weaver, Sam Worthington, Stephen Lang, and Producer Jon Landau. Empire Magazine (@empiremagazine) shared a snap of this moment that surely left attendees starstruck.

Okay, James Cameron is now turning the #D23Expo into a 3D movie theatre! We’re handed out 3D glasses, and get to see several new clips from #Avatar: The Way Of Water. The first sees the Sully family frolicking underwater, and the visuals are truly breathtaking. #D23Expo

Okay, James Cameron is now turning the #D23Expo into a 3D movie theatre! We’re handed out 3D glasses, and get to see several new clips from #Avatar: The Way Of Water. The first sees the Sully family frolicking underwater, and the visuals are truly breathtaking. #D23Expo pic.twitter.com/83wvSstzDl

We also got a first look at all-new concept art that reassures this film will have astonishing visuals taking viewers back into the world of Pandora. From Avatar (@officialavatar) on Twitter:

Brand-new concept art has arrived for #AvatarTheWayOfWater, in theaters December 16.

Los Angeles Times reporter Todd Martens, also present at the event, commented on the nearly six different snippets presented during the panel, commenting that the story takes place about a generation after the first film, with Jake Sully (Sam Worthington) and Neytiri (Zoe Saldaña) now having a family, including a recast Sigourney Weaver as their adopted daughter, Kiri. She will be a central character in Avatar: The Way of Water.

Another crucial premise for the story is family. Per Los Angeles Times:

“The whole movie deals with the protecting of family, and the protecting of familial love,” said Worthington. “On many levels — the communal family, the family that we choose. We’ve all gone through COVID and realized that the currency of love and being with your family is paramount to what life is and is worth fighting for.”

Martens also commented on the transition from the stunning reef to a science lab and a fight, adding that “‘Way of Water’ will be violent, as audiences watched an arrow shot from Neytiri’s bow pierce a skull. In Cameron’s world, even gunfire erupts in orange multicolors.”

In another of the scenes, Todd details an argument between Sully and Neytiri, with the camera taking the perspective of children peeping through the holes of their yurt-like shelter, implying a family conflict and the effects it has across generations. “While audiences got about 8 minutes of footage, including a scene that showed the Sully family are still viewed as outsiders among their peers, what soared were the moments in which Cameron let audiences explore Pandora,” he added.

In the final sequence, attendees witnessed the Sully family learning to ride a giant sea creature with an eel-like neck and long, flowing fins, proving that Avatar: The Way of Water will evoke wonder among viewers. Martens added a statement from Zoe Saldaña, addressing how the film will strongly rely on the drama of a Na’Vi family, “When we ended in part one, they choose each other and they fought together,” said Saldaña, “so the continuation of that bond meant that they were going to grow as a family and have a family.”

The original film has been in a constant dispute for the number 1 spot as the highest grossing film of all time with Marvel’s Avengers: Endgame, with James Cameron’s 2009 Avatar having a lifetime gross of $2,847,397,339, while Avengers: Endgame (2019) has a lifetime gross of $2,797,501,328. With stunning visuals, a solid plotline, and a star-studded cast, it is no wonder Avatar remains the highest-grossing film of all time.

With what D23 Expo attendees could enjoy and the reactions the clips caused among the audience, Avatar: The Way of Water promises to be an equally astonishing and memorable film, completely capable of competing in the list of highest-grossing movies and possibly even taking the place of its forerunner.

Avatar: The Way of Water is scheduled to premiere in theaters on December 16, 2022.

Are you excited about Avatar: The Way of Water? Let us know in the comments below!