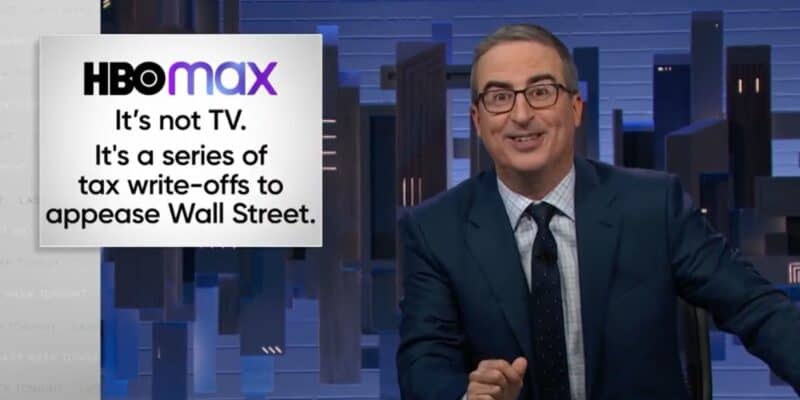 It seems that streaming service HBO Max and Warner Bros. Discovery are rubbing even their own people the wrong way.

Previously, it was reported that newly-merged Warner Bros. Discovery would be pulling a shocking 36 shows from their roster of available HBO Max streaming titles, in an elaborate tax write-off scheme. Part of this move by new execs to save billions of dollars resulted in the premature axing of near-complete films — DCEU’s Batgirl starring Leslie Grace, included.

Now, it seems that even the people on the Warner Bros. Discovery payroll have something to say about the merger and subsequent HBO Max debacle.

British-born comedian John Oliver has no qualms about taking bites at the hand that feeds him, calling Warner Bros. Discovery out on the HBO Max streaming cuts done to appeal to investors, diminishing existing streaming content.

John Oliver taking another shot at his new parent company Warner Bros. Discovery for removing shows from HBO Max without warning all in the name of tax cuts…

John Oliver taking another shot at his new parent company Warner Bros. Discovery for removing shows from HBO Max without warning all in the name of tax cuts… pic.twitter.com/53dPr4uVwn

In a viral TikTok and Twitter video, Conover calls Warner Bros. Discovery out for their greedy “corporate f***ery”. In it, he mourns the loss of fan-beloved franchises like Cartoon Network and HBO Max Original Infinity Train (2019), currently at 100% on Rotten Tomatoes, and critically acclaimed shows like Summer Camp Island (2018). Much of the canceled list of shows houses content that cannot be accessed elsewhere, with losses from franchises like Sesame Street and American Pickle.

Conover tweeted in his own thread on the HBO Max streaming cancelations:

Made a little TikTok about the WB/Discovery merger and how it’s screwing over not just media workers, but consumers too:

Made a little TikTok about the WB/Discovery merger and how it's screwing over not just media workers, but consumers too: pic.twitter.com/EwXiWbvMRr

There seems to be a significant amount of unhappiness coming from Warner Bros. Discovery’s current and past staff post-merger, with the current HBO Max content losses proving the company’s main aim being to satisfy Wall Street.

With the future of the DC Universe with departing DC Films boss, upcoming Ezra Miller-centric Flash film, as well as controversial J.K. Rowling-helmed Harry Potter Wizarding World franchise all up in the air — these further HBO Max changes definitely make it feel like the company is just burning bridges and goodwill left, right and center.

What do you think about these HBO Max streaming changes and the upset from prior and existing staff? Sound off in the comments below!