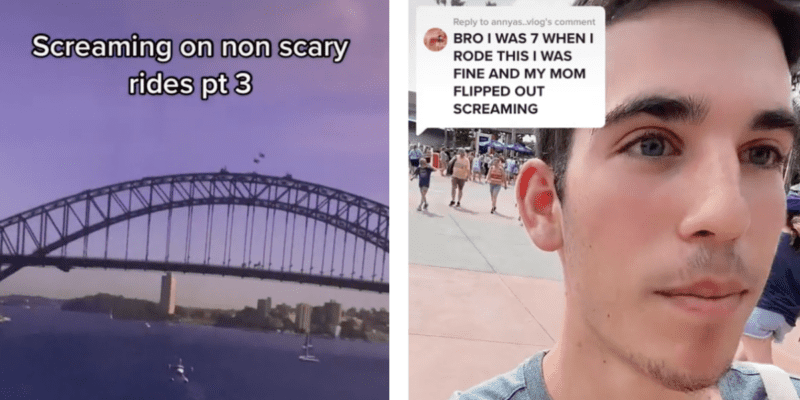 Walt Disney World and Disneyland Resort have their fair share of thrill rides, from the all-new Guardians of the Galaxy: Cosmic Rewind at EPCOT to Rock ‘n’ Rollercoaster at Disney’s Hollywood Studios.

However, Disney Imagineers do their best to include a majority of family-friendly attractions that Guests of all ages can enjoy. TikToker @amitbarron enjoyed a variety of attractions at Magic Kingdom, EPCOT, Disney’s Animal Kingdom, and Disney’s Hollywood Studios on a recent vacation to Central Florida with his family.

At first, the Guest just shared videos dancing with his family at the Disney Parks… until he went viral doing a Disney Parks TikTok challenge. He filmed himself feigning terror on Soarin’ Around the World at EPCOT. You can see the video below or by clicking here:

The video received 2.7 million views, so the Guest continued the trend. He ended up posting 14 videos of himself screaming at the “wrong time” on Disney Park attractions, like this one on Remy’s Ratatouille Adventure in France at EPCOT. You can see the video below or by clicking here:

The Guest ended up with over 12,000 followers because of his Walt Disney World Resort TikTok videos. While he was visiting EPCOT and Magic Kingdom, he decided to start a new trend. You can see the video below or by clicking here:

“If you’re in Disney World, in EPCOT or Magic Kingdom today, and you see me, come up and ask me for a picture or act like I’m famous,” the Guest said in another video. “I just want to see how it plays out. I want to see peoples’ reactions. And also… I’m trying to make my mom think that I’m like, ‘famous.'”

He didn’t say if anyone actually came up to him at the Parks, but continued posting “screaming on non-scary Disney ride” videos during and after his vacation ended.

Amid dangerous TikTok trends like Guests sticking their feet in Disney ride water, this Guest brought some harmless joy to other Guests at the Disney Parks and on social media.

Have you ever played a prank at the Disney Parks?